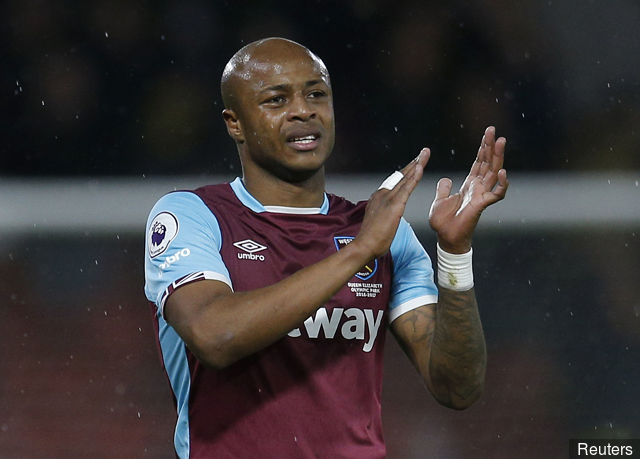 West Ham United are ready to offload striker Andre Ayew in the upcoming January transfer window as new boss David Moyes attempts to create funds to freshen up his squad, according to Claret & Hugh.

It was only six weeks ago that the Ghana international was the toast of the East End after his two-goal salvo sparked an incredible 3-2 comeback win for the Hammers against Tottenham Hotspur in the Carabao Cup at Wembley after being two goals down.

Ayew was a then record signing for West Ham when he signed from Swansea City in a £20million deal back in 2016 but has endured an underwhelming spell at the London Stadium having made just 36 appearances and scoring a lowly eight goals.

His time at the club has been plagued by injury and none more galling than the thigh complaint he sustained just 35 minutes into his debut against Chelsea last season, which would ultimately keep him out of action for eight weeks.

The arrival of attackers Javier Hernandez and Marko Arnautovic over the summer in big-money deals have pushed the 27-year-old down the West Ham pecking order and it is understood that the Hammers are willing to entertain offers of around £12million to prise him away.

The Irons faithful have been getting impatient with his lack of end product alongside questions surrounding his attitude, but on his day he is a match-winner and his mixture of pace, in addition to a keen eye for goal, will ensure there is no shortage of willing suitors to obtain his signature.

It has been a poor start to the Moyes reign so far with just one point from a possible 12 and it won’t get any easier for West Ham as they face two huge crunch Premier League home derbies in successive games against Chelsea on Saturday followed by Arsenal four days later.