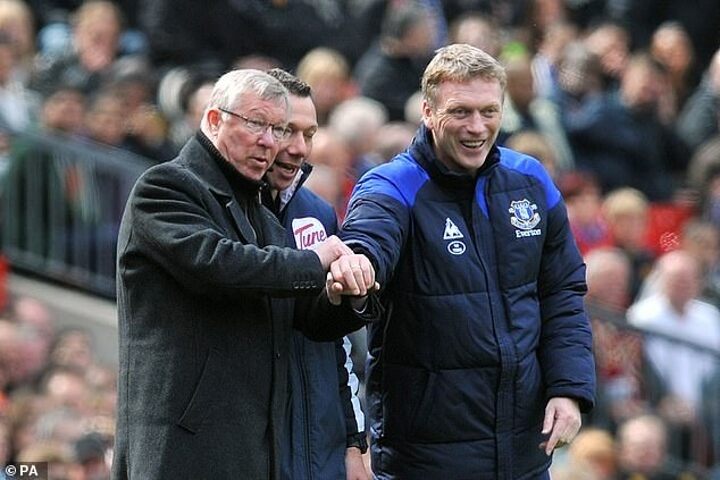 Sir Alex Ferguson has texted David Moyes to praise the work he is doing, with the West Ham manager saying anyone who calls him a ‘dinosaur’ lacks intellect.

Moyes, who replaced Ferguson as Manchester United manager in 2013, faces his old club on Saturday.

The 57-year-old Scot defended his coaching credentials, hitting out at anyone who thinks he is not a modern manager who has evolved over time.

‘I shouldn’t even have to defend myself. I feel more sad for the people who say that because it shows their lack of intellect,’ Moyes said when asked about the “dinosaur” tag used by some supporters.

‘Maybe on the field it’s not been as noticeable as it should be. Ultimately as a manager you have to prove yourself. Some occasions, it’s not been as good as I’d like but I took on difficult jobs.

‘I would never regret taking the Manchester United job, but leaving Everton was such an incredible big decision. Sometimes only when you leave do you realise how good the Everton team were and how close they were.

‘We got to fourth once but at that time there just wasn’t the investment to give me a chance to take Everton and break in amongst one of the four big clubs.

‘I went to Real Sociedad. I don’t know of many other British managers being offered a job in one of the major leagues. I came back and took the Sunderland job.

‘I’m in a really good place because I’ve got a brilliant bunch of lads.’

Moyes says he has got his ‘mojo’ back and revealed Ferguson texted him two weeks ago after a win to praise him. ‘Sir Alex was always very good to me,’ he said. ‘He was very good to me at United.

‘To replace him was a great honour. He was very feisty on the touchline and might fall out with you. But he always shook your hand, gave you a glass of wine and if you needed to phone him on anything, he would always be there for the call.’

Moyes has limited sympathy for current United boss Ole Gunnar Solskjaer, who is feeling the heat.

Edinson Cavani could make his first Premier League start on Saturday, seven years after Moyes travelled to France on a scouting mission as United manager.

In the end, Moyes decided against signing the Paris Saint-Germain striker.

‘I remember at the time speaking to the representatives of Cavani,’ Moyes said. ‘The problem I had was I had Robin van Persie, Wayne Rooney, Chicharito (Javier Hernandez) who were already in that position and several other up-and-coming players.’