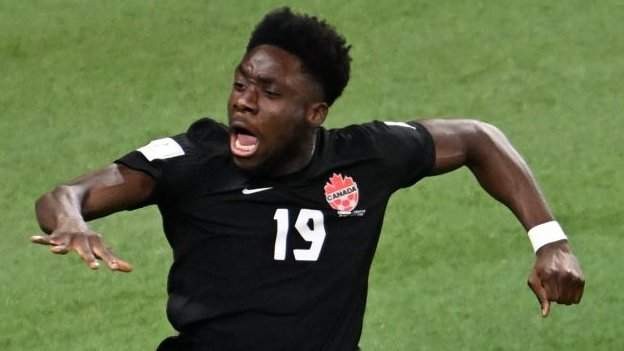 It was a moment that will go down in Canadian football history.

The country's star player Alphonso Davies leapt high into the Doha sky to meet Tajon Buchanan's perfect cross and power in a header to become the first man to score for the Maple Leafs at a World Cup.

The opener against Croatia came just 68 seconds into the game and sent the North American side's supporters into raptures inside Khalifa International Stadium.

Boss John Herdman said afterwards: "It was a great start and a proud moment for the fans in the stadium and people back home. We got to celebrate something we have been waiting for a long time."

But 2018 finalists Croatia did not read the script as they hit back to win 4-1 and end Canadian dreams by sending them out of the tournament following back-to-back defeats.

Winger Davies' name will be etched forever in Canadian folklore as the man who scored their first World Cup goal in their fifth game - and following 50 missed attempts.

His back story is one of incredible resilience which has seen the 22-year-old experience a meteoric rise.

Born in a refugee camp in Ghana in 2000, Davies' parents fled civil war in Liberia and moved to Canada as refugees when he was aged five.

But he now plays for Bayern Munich - one of Europe's biggest sides - after the Bundesliga champions paid a then-Major League Soccer record £9.84m to sign him from Vancouver Whitecaps as a 17-year-old in 2018.

Former England defender Martin Keown said on BBC One: "Alphonso Davies' pace is stunning. When he wins the ball he travels with such pace. I've seen him play centre-forward for Canada. They see him as their Gareth Bale.

"Davies really is an incredible player. Canada just need two or three of him on the pitch."

Canada have four years to unearth some more players of Davies' quality before they co-host the 2026 tournament alongside the USA and Mexico.

Boss Herdman said: "We have young lads who have grown up through Canada and they showed they can compete.

"These players can really believe they are in the right direction for 2026."

Davies, though, may feel a sense of regret. Despite scoring the quickest goal of this World Cup so far against Croatia, his missed penalty against Belgium at 0-0 in the opener proved crucial as Canada went on to lose 1-0.

They round off Group F against unbeaten Morocco next Thursday, hoping they can end this campaign on a high as they look forward to the next one.