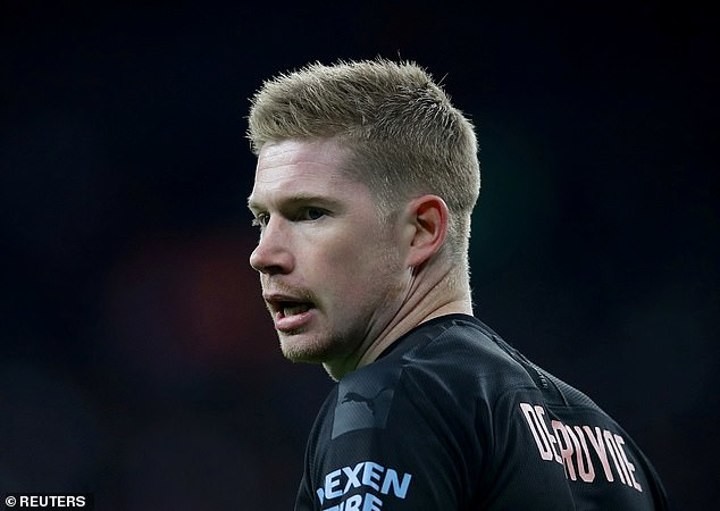 Manchester City star Kevin De Bruyne has named his dream XI made up of his current and former team-mates.

The Belgium international named the XI while on Instagram live with compatriots Romelu Lukaku and Axel Witsel during the coronavirus lockdown.

De Bruyne, who also said he wants to extend his career by a further two years due to the current Premier League suspension, picked the likes of Eden Hazard, Raheem Sterling and Sergio Aguero in his XI.

Speaking on Instagram, De Bruyne said of his selections: 'For me, in goal, you have to choose between Thibaut (Courtois), Edersen and Cech. How can you choose? I'm going to say Cech based on his whole career and playing 15 to 20 years. The others can do the same after.

'Right back I would take Kyle Walker: unbelievable, powerful and speed.

'Centre back I would take Vinny (Vincent Kompany). He still counts as a player, or is he a manager? I could choose (Aymeric) Laporte or John Terry, Jan Vertonghen or Toby Alderweireld. If you go on career, probably John Terry.

'Left back, the best and the craziest is probably (Benjamin) Mendy.

'The most underrated player is Fernandinho. A lot of people don't know what he does unless you play with him. He's also 35 (actually 34) and you see what he does - it's crazy.

'I would take David Silva and Lampard, two guys I played with for a few minutes. Offensive players.

'I have to choose Eden (Hazard), Kun (Sergio Aguero) and Raheem (Sterling).'