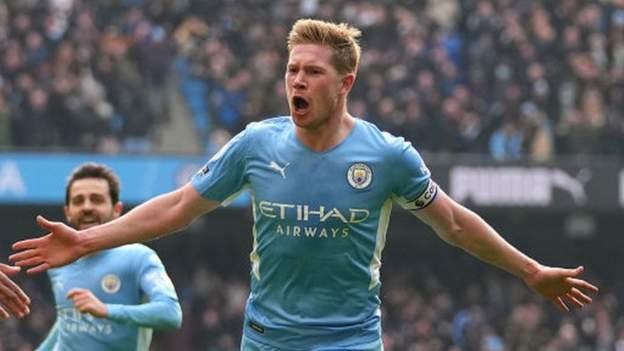 The former Chelsea player broke the deadlock in a tight game with a superb curling drive past keeper Kepa Arrizabalaga with 20 minutes left to extend City's lead at the top of the table to an imposing 13 points.

Chelsea had their chances, the best coming when Ederson saved from Romelu Lukaku in the second half but De Bruyne made the difference and City now also have a 14-point advantage over Liverpool, who have two games in hand.

City deserved the win for their greater urgency and possession, Kepa keeping out Jack Grealish with a first-half save, and this represents another significant stride in their quest to retain the Premier League crown.

Follow live text commentary of Manchester City v Chelsea, plus the rest of Saturday's Premier League gamesGo straight to all the best City contentScroll through our Chelsea page

In a game of this nature, fought out by two well-disciplined sides led by elite managers in Pep Guardiola and Thomas Tuchel, it always seemed likely a mistake or a moment of the highest quality would settle it.

And so it proved as De Bruyne created and finished the decisive move all on his own as City and Chelsea strived to make the breakthrough.

City had not been able to impose sustained threat on Chelsea, despite having so much possession, but they have the calibre of player who can fashion a goal out of nothing.

On this occasion, it was De Bruyne who stepped up, running deep into Chelsea territory in the 70th minute before curling a perfect low right-foot finish before the outstretched left arm of Kepa and into the bottom corner.

Etihad Stadium celebrated in a fashion fitting for a moment of such class and importance and these three points once again give the impression that City's lead in the title race is pretty much unassailable.

Guardiola has stars at the other end too and keeper Ederson played his part with a vital save from Lukaku when he was clean through. He also brought fist pumps and wild applause from his manager when he raced out of the area to head clear and snuff out Chelsea danger late on.

City closed out the win without any serious alarms, Guardiola and his team striking a huge blow as they try to see off the chasing pack - which is effectively Chelsea and Liverpool - at the top of the Premier League.

Chelsea show effort but no inspiration

Chelsea for long spells looked like they might leave Etihad Stadium with some reward for a performance in which they kept Manchester City at arm's length for long periods.

In the end, however, they were undone by that moment of De Bruyne genius and their own inability take the rare opportunities that came.

Lukaku, who looks to be struggling for form and confidence, had those opportunities that you simply must cash in on against a team going for their 12th successive league win.

He was in a good position to shoot in the first half as he broke clear but chose to pass up responsibility and play in Hakim Ziyech, who added to manager Tuchel's frustration by straying into an offside position.

The biggest chance of all came when Lukaku was played through by Kovacic in the second half with the scoreline still goalless. There was not too much wrong with his finish but it lacked a little conviction and Ederson was able to make a save that proved crucial.

Tuchel's discontent was clear throughout as he saw his team penned in by City but Chelsea could have got something, even if it may have been fortuitous in the context of the entire game.

Once De Bruyne ended the stalemate, Chelsea had little to offer and in reality any very slim title hopes they may have had have been extinguished completely by this defeat.

Mateo Kovacic (Chelsea) wins a free kick in the defensive half.

Attempt saved. Jack Grealish (Manchester City) left footed shot from a difficult angle on the left is saved in the top left corner. Assisted by Rodri.

Attempt missed. Phil Foden (Manchester City) left footed shot from the centre of the box is too high. Assisted by Raheem Sterling.

Attempt blocked. Timo Werner (Chelsea) right footed shot from the centre of the box is blocked. Assisted by César Azpilicueta.

Attempt missed. Raheem Sterling (Manchester City) right footed shot from the right side of the box is close, but misses to the left. Assisted by Phil Foden.

N'Golo Kanté (Chelsea) wins a free kick in the attacking half.