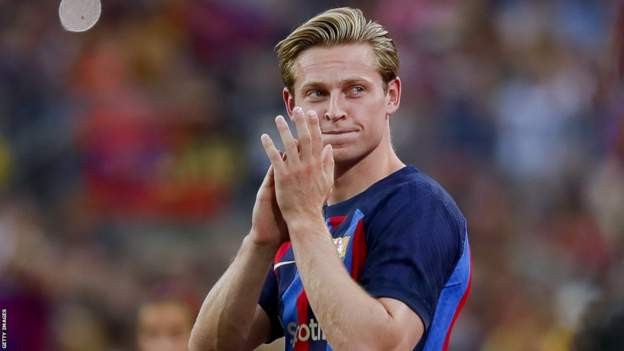 The Premier League side agreed a £63.5m deal for the Netherlands midfielder, 25, last month, but the move is yet to be finalised.

De Jong came on at half-time and scored in Barcelona's 6-0 friendly win over Pumas UNAM on Sunday.

"He is a Barca player of great quality and we want him to stay," said Laporta.

"He has offers but we want him to stay and he wants to stay too."

De Jong has been linked with a move to Chelsea, but is also a key target for new Manchester United manager Erik ten Hag, whose side lost 2-1 at home to Brighton on Sunday in his first game in charge.

Reports have suggestedexternal-link Barcelona want De Jong to take a wage cut should he remain at the Nou Camp, amid the club's financial troubles.

The club are currently involved in a disagreement with De Jong over wages deferred by the Dutchman in the last couple of years which are now due to be paid.

Barcelona have so far spent over £120m this summer on new signings Robert Lewandowski, Raphinha and Jules Kounde, with Andreas Christensen and Franck Kessie arriving on free transfers.

However, the club has failed to register the players with La Liga requesting that more money be raised.

Should Barcelona not register their new signings in time, they will not be available for their season opener against Rayo Vallecano on Saturday.

Four of Barcelona's new arrivals were involved during their 6-0 friendly win over Mexican side Pumas, with Lewandowkski impressing on his debut.

The Poland striker, who joined from Bayern Munich for £42.6m last month, opened his account in the third minute with a neat finish from a tight angle, while also providing two assists for Pedri.

Raphinha, who moved from Leeds this summer in a deal worth up to £55m, was also in the starting line-up, while Kessie and Kounde came on as second-half substitutes.

'We bleed craft beer': Can BrewDog's CEO steer the Good Ship through the storm of controversy?Why hasn't athletics cracked America? The Sports Desk explores its struggles in the US