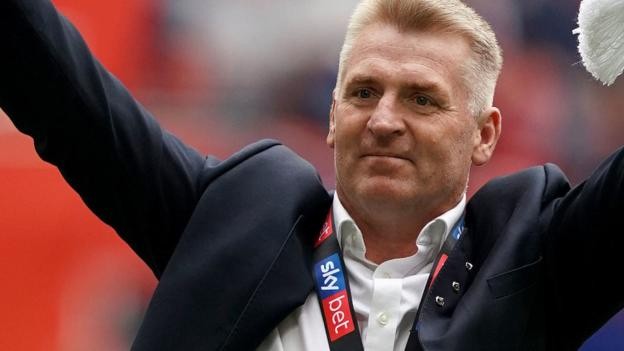 A quick internet trawl for Dean Smith on a well-known search engine is very revealing.

For those wishing to know, Smith was born in West Bromwich, he is suddenly worth quite a lot and, to confirm, Dean Smith is in charge of Premier League Aston Villa.

Next season, the 48-year-old will be one of just six English bosses in the Premier League, but it is fair to say that he is hardly high profile.

One question that will not come up is "how did Dean Smith help a friend in desperate trouble and at his lowest ebb because of depression?"

Martin Ling has the answer to all four; he does not need to gen up on the Villa fan, turned Villa boss.

Former Leyton Orient and Cambridge manager Ling, now the O's director of football, is one of Smith's closest friends going back to their playing days at Brisbane Road more than 22 years ago, and subsequently when Ling gave Smith his first coaching role in the O's youth setup.

But Ling, who has suffered with depression for more than 10 years, values Smith's qualities as a friend away from football far more.

Ling's struggles with the debilitating illness have been well documented. At his lowest point, Smith was there for him.

"When I was in the Priory the first time after my breakdown, he was the one who gave me some home truths when I was feeling sorry for myself," Ling told BBC Sport.

"I was sat in my room with my curtains closed and he signed up as a carer so he could take me out for a walk.

"He knew what made me tick. At the time I did not appreciate it, but looking back I realise how important it was. If the roles were reversed, I would do the same," said the 52-year-old.

On the pitch, Smith and Ling bonded as players when Smith joined Orient in 1997.

Martin Ling has been a manager at Leyton Orient, Cambridge, Torquay and Swindon

"Dean was soon the team captain and I was club captain," Ling said. "We were the figureheads and both leaders and the friendship has been really tight ever since. I speak to Dean once or twice a week.

"He was always destined for coaching and management. He always had the drive. Dean has great integrity, is as honest as the day is long and is meticulous in what he does.

"He recognises how to get the best structure in place, which is vital. He fills in the gaps and is bang on."

Ling's friendship has not required the serious intervention his depression demanded, but his role in Smith's managerial development has been crucial and Smith has always recognised it.

The honesty levels were not quite the same.

'Your legs have gone'

Smith returned to Orient to work in the youth setup in January 2005, after some gentle persuasion from Ling.

He said: "I saw some highlights of goals Port Vale conceded when he was playing and told him his legs had gone and he should come and work with me!"

The move and over-egging of Smith's failings as a player proved a masterstroke, with Smith soon working as Ling's assistant as the duo took the O's up from League Two in 2006.

"It was a good mix; he loves his coaching and was very hands on," Ling explained. "We gelled and covered each other. He took so much pressure off me."

Recognising each other's flaws and deficiencies were key. That honesty has served them well on the training pitch and away from football matters.

"We had and have such a strong friendship," Ling added. "No one is scared to have their say. I might ignore them but you have to hear them.

"You need to be critical and open, and we were - and it just worked."

The duo went their own ways when Ling moved to Cambridge.

"I got an offer and it was for the pair of us, but then they changed their mind about Deano at the last minute," Ling said.

"I was going to turn it down but he said 'take it'. He's that type of man. Selfless. He went to Walsall as head of youth and was a step down or sideways, but he did that and he has progressed pretty nicely."

An eight-year management career started with a four-year spell at the Saddlers in 2011. Three years with Brentford brought plenty of acclaim for keeping the Bees in the top half of the Championship table, while playing an entertaining style of football on a very limited budget.

His move to Villa came about in October 2018, where a bright start was followed by a dip, but a record-breaking 10-game winning run led to the play-offs and Monday's memorable Wembley win against Derby County.

"Dean Smith is not a name that means much to lots of people in the game because he was a journeyman footballer, but he's proved himself," Ling added.

"He's always been a Villa nut. I am a West Ham fan so we would have plenty of claret and blue banter.

"He is probably still pinching himself that he is managing his boyhood club."

It is time to believe. Reality will soon hit when the 2019-20 Premier League fixtures are revealed on 13 June and Ling may well be on to his mate for tickets for the West Ham game.

Smith has made an impact that few, if any, of his predecessors achieved and he has done it with a "steady as we go" approach.

When he took over there were no radical changes in systems or personnel, just a tweak here or there to help his players realise their potential. Subtle changes have made a big difference.

As a boy, Smith used to clean the seats in the North Stand at Villa Park on a match day in exchange for a place in the Holte End. He is fan and manager all in one and that, for me, is the key to his success.

He knows what it means to the present day Holte Enders because he was one of them and he is also a manager with more than 400 games tucked under his belt.

Some managers or coaches may have the technical knowledge and not quite "get" a football club, in Dean Smith Villa have a manager made on the Holte End.