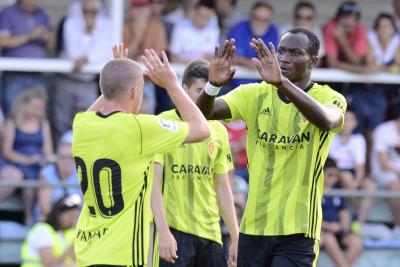 Ghana striker Raphael Dwamena came off the bench to score five goals on his debut for Real Zaragoza as they thump lower-tier side Peña Ferranca 13-0 in a pre-season encounter on Friday.

Dwamena joined the Whites in a season-long loan deal from Spanish La Liga side UD Levante.

The Ghanaian forward is widely expected to use the loan stint to play regular football after warming the bench for the Valencia-based outfit last term.

Just three days after completing the transfer, the former FC Zurich striker was handed his debut in the side’s opening match of the pre-season at Boltaña, a province in Spain.

He emerged from the bench at half time to score five goals in the space of 30 minutes.

The striker’s goalscoring form will delight coach Victor Fernandez ahead of the Spanish Segunda Division season.