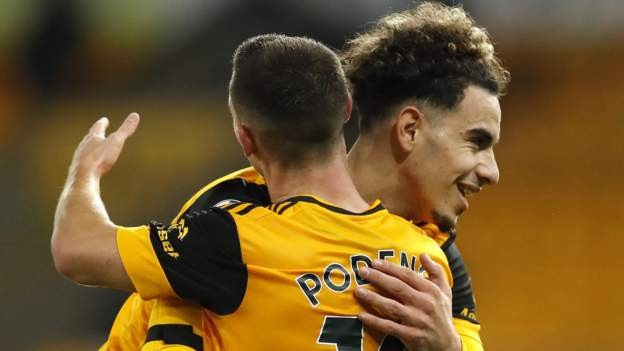 Teenager Rayan Ait-Nouri scored on his Wolves debut as Nuno Espirito Santo's side moved joint top of the Premier League with a deserved victory over Crystal Palace at Molineux.

The France Under-21 left-back, 19, joined the club on a season-long loan - with an option to buy - from Ligue 1 Angers this month and took just 18 minutes to announce himself with a first-time strike from Cheikhou Kouyate's headed clearance.

Wolves went close to more first-half joy as Nelson Semedo and Leander Dendoncker narrowly missed with efforts from outside the box, while the video assistant referee denied Palace a lifeline from the penalty spot when Patrick van Aanholt was found to be offside, prior to being felled by Willy Boly.

Palace were much improved after the break but a frustrated Wilfried Zaha had a penalty appeal dismissed and a disappointing night for Roy Hodgson's side was compounded when Luka Milivojevic was shown a red card for a tackle on Joao Moutinho in the closing stages.

A fourth victory from seven games moved Wolves up to third in the standings, level on 13 points with Everton and Liverpool who both have a game in hand.

While his last match in an Angers shirt was a 6-1 defeat by Paris St-Germain, this was a night that will live long in the impressive Ait-Nouri's memory.

Manager Nuno had challenged his side to become much more clinical after they were held 1-1 by Newcastle last weekend, their failure to kill the game punished by Jacob Murphy's 89th-minute free-kick.

Only the bottom three sides had scored fewer Premier League goals than Wolves prior to kick-off, while another well-documented concern has been their slow starts to matches.

But debutant Ait Nouri's goal - Wolves' first in the first half since the opening day - marked the start of a pleasing evening for the Portuguese coach.

Podence, whose two Premier League goals have both come against Palace, led the early Wolves charge as his curling shot forced Vicente Guaita to tip over, after Dendoncker had earlier headed on to the post from his cross.

Dendoncker struck the bar before denying Scott Dann from a corner at the other end as Wolves effectively kept Palace at bay - and though they were forced to work much harder after the interval, they never looked at risk of relinquishing their lead.

With Podence's goal proving crucial in avoiding another nervous finish, Nuno will be eager for his team build on their rapid start at Molineux going forward.

Half-time response not enough for Palace

Crystal Palace arrived at Molineux looking to take 13 points from their first seven games of a Premier League season for the first time ever, with the added incentive of climbing into the top four.

Despite returning to winning ways against Fulham last weekend, Hodgson's side were second best for much of the first half and were lucky not to find themselves more than 2-0 down at the break.

It was a night when things did not fall the Eagles' way, as Michy Batshuayi had a goal ruled out for offside after 17 minutes and Zaha was shown no sympathy after going down under a challenge by Ait-Nouri after the restart.

A consolation for Hodgson on a disappointing evening was the notable second-half response from his players, despite the all-important absence of a breakthrough.

Zaha, having contributed five goals and one assist to Palace's eight league goals to date, cut an increasingly frustrated figure in attack, most evident as he received a yellow card for a shove on Ait-Nouri.

Milivojevic's dismissal, awarded retrospectively by VAR for a studs-up challenge, only served to further dampen a result Hodgson will want to bury quickly after a promising start to the campaign.

Wolves' third-place position in the Premier League is their highest at the end of a day this far into a top-flight season since October 1979, when they went on to finish sixth and win the League Cup.Wolves' Rayan Ait-Nouri is the 15th Frenchman to score on his Premier League debut and, at 19 years and 146 days, he is also the youngest Frenchman to do so.Wolves striker Raul Jimenez has now played more Premier League minutes against Crystal Palace without scoring than against any other team (421).Only relegated Norwich City (14) have lost more Premier League games in 2020 than Crystal Palace (13).Since Roy Hodgson's first game in charge in September 2017, the Eagles have failed to score in 39 Premier League matches. Only rivals Brighton have done so more (40).Palace midfielder Luka Milivojevic received his first red card in league competition since February 2016 for Olympiakos, with this his 145th game since.

Eberechi Eze (Crystal Palace) wins a free kick in the defensive half.

Cheikhou Kouyaté (Crystal Palace) wins a free kick in the defensive half.

Attempt saved. Adama Traoré (Wolverhampton Wanderers) right footed shot from the right side of the box is saved in the top right corner. Assisted by Raúl Jiménez.

Attempt missed. Patrick van Aanholt (Crystal Palace) left footed shot from outside the box is too high from a direct free kick.

Luka Milivojevic (Crystal Palace) wins a free kick in the attacking half.

Rugby Union Weekly: The Premiership review, a Six Nations preview and Eddie JonesAmericast: All you need to know as the US election day nears