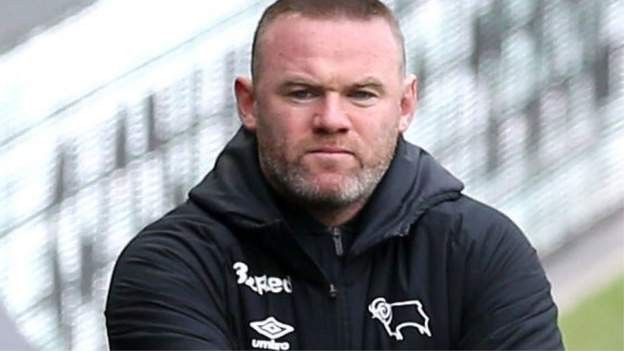 Wayne Rooney says Derby County's relegation shootout with Sheffield Wednesday at Pride Park ranks alongside any game he has been involved with.

Rooney won 120 England caps and played in three Champions League finals in his stellar playing career but the end of his first season as a manager could not be any more tense.

"It is the biggest game in terms of what's at stake for the club," he said.

"It's important to so many in the city, to everyone connected with Derby."

A run of one win and just five points from the past 13 games has dropped the Rams from a comfortable position to fretting about their final match of the season.

Victory will secure Derby's Championship status but a draw would leave them hoping Rotherham fail to win at Cardiff, while defeat would condemn them to the third tier for the first time since 1986.

It would be only their fifth campaign outside the top two tiers of English football in their entire history.

Three from four to go down - who will be relegated from the Championship?

For all the trepidation around Derby, Rooney was in relaxed mood as he carried out his pre-match media duties. He said he was "refreshed, excited and looking forward to the game", and called on his players to "embrace" the pressure of the cup final he said they were facing.

He said his preparation might be similar to the evening he spent before the 2008 Champions League final in Moscow, which he spent relaxing in bed watching Sister Act.

"It might not be Sister Act this time," he smiled.

Yet, after saying virtually every week since he stepped in as Phillip Cocu's replacement as manager in November - initially as part of a four-man coaching team - that he was "100% confident of staying up", Rooney knows there is a lot on the line for him in terms of reputation in the Sheffield Wednesday game.

However, win or lose, the 35-year-old is adamant he will be staying with the Rams next season.

"My future is with Derby," he said. "I am never one to walk away from a challenge.

"I want to push this club forward and get us closer to getting into the Premier League. I feel we can have a real impact on this team."

If Derby are relegated, they would immediately lose £3.95m, which is the difference in Premier League solidarity payments to Championship clubs and those in League One.

There would also be fresh scrutiny put on Erik Alonso's proposed purchase of the club from Mel Morris.

There are many rumours around the true scale of Derby's debt and what sums are owed to whom.

However, it is known that £17.5m is owed to MSD,external-link who have provided funds to a number of English football clubs in recent times. In addition, BBC Sport has been told Derby asked for a loan out of the £117.5m agreed by the Football League with MetLife Investment Management in March, which is to help cover outstanding tax liabilities.

Morris bought Pride Park from Derby for £81.1m in 2018, although some of that money was borrowed from a Swiss financier, Henry Gabay, which has now been paid back.

It is understood the deal Alonso has submitted to the EFL involves further borrowing to allow funds to be spent on the team and that the 29-year-old would not view relegation as a catastrophe because he feels the club can be rebuilt.

However, without greater clarity over the extent of funding and source of it, plus the level of debt being proposed, the EFL is unlikely to let the takeover proceed having taken a forensic approach to the situation at Wigan, who spent nine months in administration as prospective buyers came forward and fell by the wayside.

With Morris unwilling to put more money into the club, it is accepted that if a deal is not completed soon, major financial problems are looming.

A source close to Alonso has told the BBC they expect the takeover to be completed relatively quickly, although someone else with knowledge of the deal has said there is no guarantee it will happen at all.

This uncertainty is the last thing Derby's fans need before such a crucial game - and no matter which way it goes, it may be a while before they can rest easily.