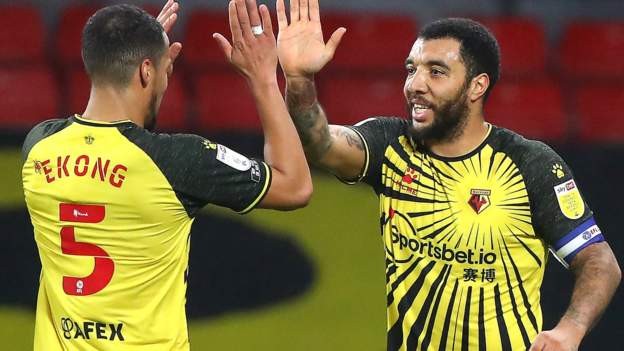 Troy Deeney's first-half penalty was enough for Watford to beat Barnsley and move up to third in the Championship.

Referee Tim Robinson pointed to the spot when Deeney prodded the ball onto the raised arm of Tykes defender Callum Brittain and though keeper Jack Walton got a strong hand to the powerful kick he could not prevent it going in.

Watford had a second goal disallowed for offside when the recalled Andre Gray tucked away a rebound after Will Hughes hit the post from 25 yards, but the visitors looked the better side for periods without creating too much.

The closest Valerien Ismael's side came to an equaliser was through Watford's Francisco Sierralta, who would have scored an own goal had it not been for Daniel Bachmann's fine stop, and defeat was Barnsley's third in a row.

Xisco Munoz's Hornets have won all three games at Vicarage Road since he took charge and are now three points behind second-placed Swansea, while Barnsley remain 10th.

The visitors had a strong appeal for a penalty of their own deep in stoppage time after Cauley Woodrow went down under a challenge from Craig Cathcart, leaving the Tykes frustrated on the final whistle.

Woodrow nodded a Conor Chaplin cross over in the first half and Callum Styles skewed wide after the break, with Watford keeper Bachmann's only save coming from his own centre-back.

William Troost-Ekong flicked a fine cross wide from close range late on as Watford looked for a second but despite that miss they have now won 32 points at home this season, seven more than any other side in the division.

Will Hughes (Watford) wins a free kick in the defensive half.

Alex Mowatt (Barnsley) wins a free kick in the defensive half.

Michael Sollbauer (Barnsley) is shown the yellow card for a bad foul.

Philip Zinckernagel (Watford) wins a free kick in the defensive half.

Attempt missed. William Troost-Ekong (Watford) right footed shot from the right side of the six yard box is close, but misses to the left. Assisted by Philip Zinckernagel with a cross following a corner.