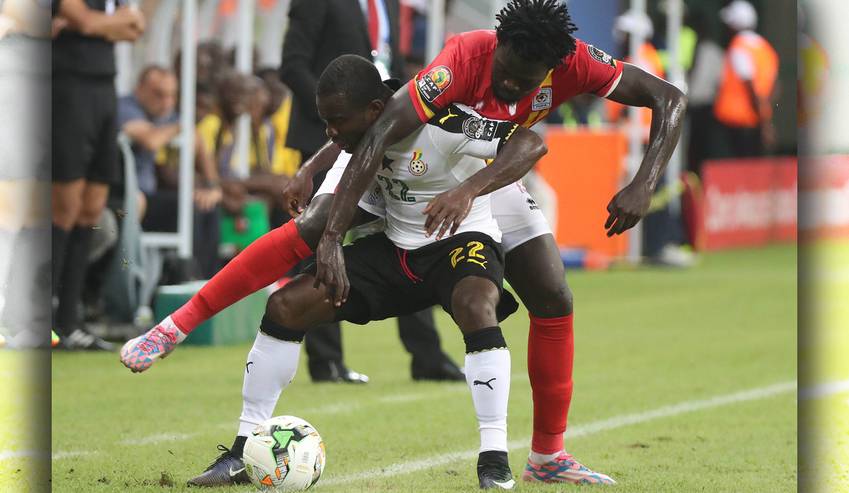 PORT GENTIL, Gabon, Jan 17 (Reuters) - Defences were on top again on another dour day at the African Nations Cup on Tuesday when the two games produced a meagre one goal between them, scored by Ghana from the penalty spot.

Andre Ayew converted the spot kick in the 32nd minute as the four-times champions scraped a 1-0 win over Uganda, who were making their return to the finals after 39-year absence.

Egypt, who themselves had not taken part at the finals since winning the title in 2010, played out a dreary goalless draw with Mali, remarkable only for the presence of their goalkeeper Essam El Hadary at the age of 44.

El Hadary, who started on the bench but was brought on in the 23rd minute after Ahmed El Shenawi was injured, became the oldest player in the tournament's history.

Overall, there was little to excite the crowd in the double bill at the newly-built Stade de Port Gentil and the tournament was left crying out for some excitement after Monday's two games in Oyem also produced a single goal between them.

Uganda's qualifying record, when they scored just six goals and conceded only two in six matches, suggested a goal feast was unlikely and so it proved.

The Cranes defended doggedly until they gifted Ghana a penalty with a moment of madness from centre back Isaac Isinde, who took his eye off the ball as he received a pass and lost possession to Asamoah Gyan, who he then tugged back to concede the spot kick.

Ayew tucked the ball away to give Ghana a deserved lead but Uganda's second-half display, when they dominated the midfield and constantly probed without being able to break through, left a good impression.

"We have the quality and the players, but we will have to do more than we did today," said Ayew, whose side are hoping to end a 35-year wait for their fifth title.

"We have players who have taken part in four, five or six Nations Cups and we need use that experience."

The second game was a bruising midfield battle with too many mistakes and few openings, except near the end when El Hadary had to come out to make a one-handed stop to deny Moussa Marega.

Hosts Gabon will hope to liven things up when they face Burkina Fatso in Group A on Wednesday while Cameroon take on debutantes Guinea-Bissau, hoping to spring another surprise after holding Gabon 1-1 in their first game.