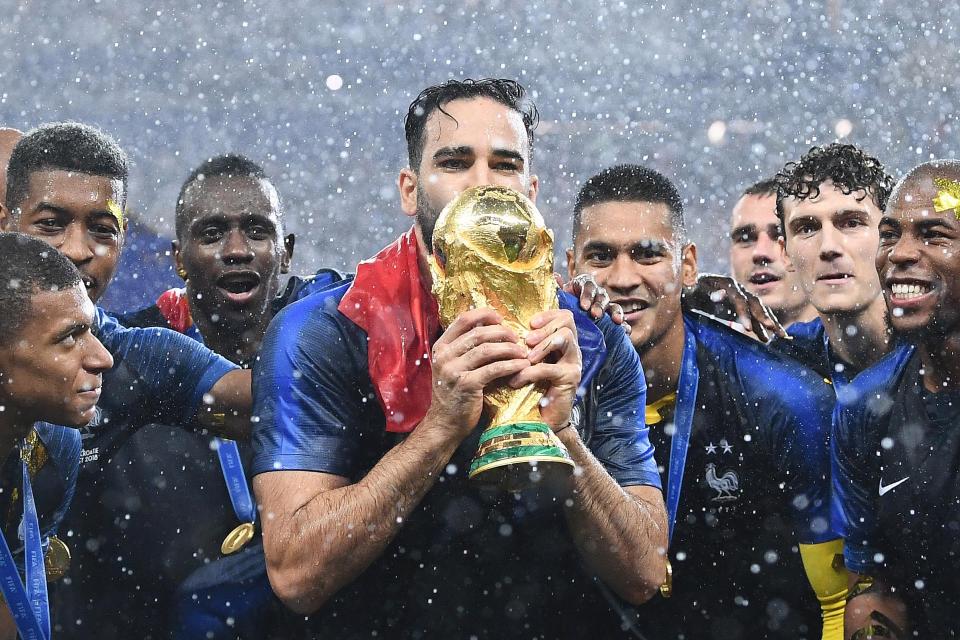 France's Kylian Mbappe and Lucas Hernandez celebrate with the trophy after winning the World Cup in Moscow on Sunday.

Fifteen members of France's 23-man squad are of African descent, a fact that divided some pundits in the country before and throughout the tournament, but Rami said their heritage was an asset.

"Me, I'm French of Moroccan origin and I'm proud of it, proud to show that I'm not a thug, proud to make my country joyous like that," Rami said. "I love France. I am also happy for everyone. This country deserves that.

"The atmosphere was extraordinary. I have never seen such a French team with this sort of chemistry. France are world champions -- we are diverse, we needed it, and everybody is celebrating, so that is huge!

"It was massive sacrifice and a lot of work, but we are champions in the toughest sport in the world."

Paul Pogba's parents arrived from Guinea, while Kylian Mbappe's dad is from Cameroon, his mom Algerian. Defender Samuel Umtiti was born in Cameroon and backup goalkeeper Steve Mandanda in Zaire. Others descended from Algeria, Mali, Mauritania, Morocco and Senegal.

"The diversity of the squad is in the image of this beautiful country that is France,'' midfielder Blaise Matuidi said ahead of the game.

The diversity in the players' roots isn't limited to Africa either. Antoine Griezmann's father emigrated from Germany, and the France forward's mother is of Portuguese descent.

"That is the France that we love," Griezmann said after the final whistle on Sunday. "It's beautiful to see it.

"There may be players who come from different origins, but we do have the same state of mind. We all play for the same jersey, the cockerel. For our country, we give everything we have. As soon as you wear the jersey, we do everything for each other."

Though he never got off the bench to appear in a game in Russia, Rami was jubilant to be on the winning side and announced his international retirement after the match.

Asked what it meant to be a world champion, the Marseille man joked: "It is normal, for us. No, I am joking -- it's crazy. I don't dare to imagine what is happening in France."