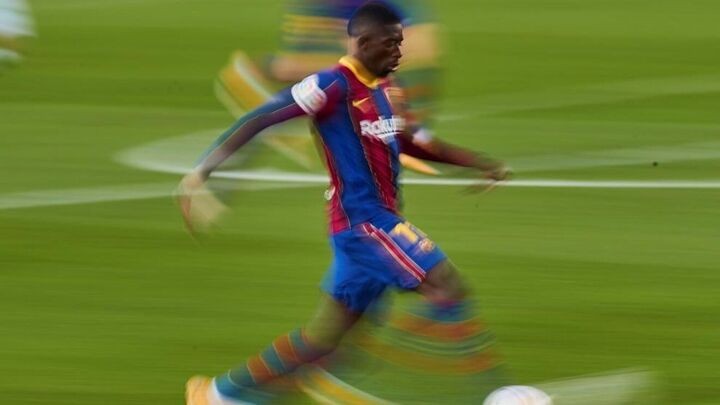 Ousmane Dembele's Barcelona future looks uncertain, with just a year left on his deal and with talk of a potential swap deal.

The Catalan club want to extend the Frenchman's contract, which expires in summer 2022, but the player appears to be in no hurry to put pen to paper. Not wanting any unpleasant surprises down the line, the Blaugrana are already exploring their options in order to avoid losing the winger for nothing.

With that in mind, and knowing that the 24-year-old has admirers at PSG and elsewhere, Barcelona have set up a meeting with his agents this week.

The idea is that if he isn't willing to sign an extension then the club will try to use him as a makeweight in a transfer this summer.

The Sunday Times reported that both Dembele and Sergi Roberto could form part of a swap deal with Manchester City, which would see Bernardo Silva and Joao Cancelo head in the other direction.

According to RAC1, Pep Guardiola ran into Joan Laporta at a golf event in Mallorca last week and let the Barcelona president know that a number of City players could be available in the transfer window. Among those players were Portugal internationals Cancelo and Bernardo Silva.

In the meantime, Barcelona are determined to take a hard line with Dembele, letting him know that he must either renew now or find himself moved on so the club can get something in exchange.

Dembele's contract isn't the only item on the agenda for Barcelona this week.

They also plan to meet with Ilaix Moriba's representatives to open discussions about renewing his contract, which also expires in 2022.

The midfielder is an in-demand man and has set his demands high, which could be a stumbling block in the talks.

The Blaugrana are keen to keep him long term, however, and are aiming for a five-year deal.