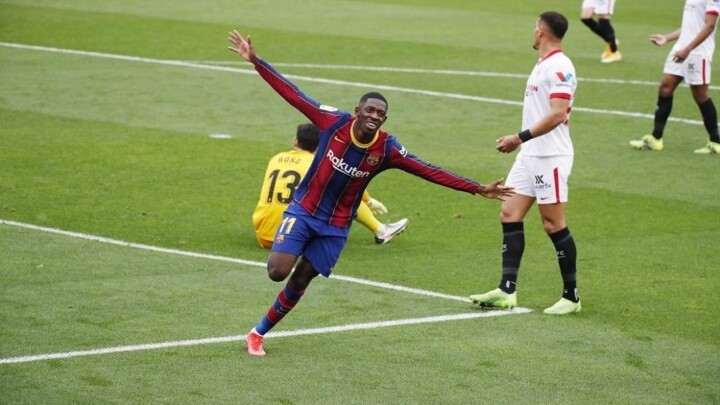 If one player has benefitted more than anyone else from Ronald Koeman's change of system at Barcelona then it's Ousmane Dembele.

The Frenchman has looked at ease in the Dutchman's 3-5-2 setup, and his speed has helped the side to pose problems to the opposition.

Dembele hadn't scored for 10 games in LaLiga Santander, not since doing so against Eibar in December. But he ended that run at Sevilla on Saturday, and managed four shots in all. On top of that, he completed 16 of his 17 attempted passes and contributed defensively.

There was no doubting that Dembele was one of the best players on the pitch in Seville, and he's given Koeman a decision to make ahead of the Copa del Rey semi-final second leg agains the Andalusians on Wednesday.

His inclusion in the XI saw Antoine Griezmann drop to the bench, and the ex-Atletico Madrid striker didn't play a single minute, but Koeman denied that Dembele's selection was a message to the No.7.

"It's not a message to Griezmann," Koeman said. "We decided to change the system, we have depth in the team, so we put Dembele in.

"At 1-0 we decided that Messi needed someone faster than Griezmann."

Optimism ahead of the Copa del Rey

The win allowed Barcelona to take confidence ahead of their next meeting with Sevilla in midweek.

The nature of the defeat against Paris Saint-Germain, followed by another slip against Cadiz, had hurt the Catalans, but now they have rediscovered that winning feeling and will want to build on that.