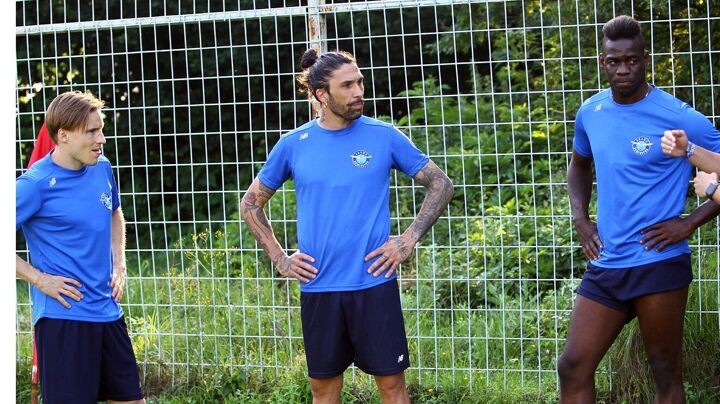 You would have been forgiven for thinking the days of lavish spending in the Turkish Super Lig were in the past following the huge economic pressure put on Galatasaray and Fenerbahce, yet newly promoted club Adana Demirspor are hoping to take the league by storm with an ambitious recruitment drive.

Mario Balotelli is the highest-profile player to have agreed to join this particular project, and it's quite likely he will soon be followed by David Luiz, fresh from his contract with Arsenal expiring.

The Adana-based club won promotion to the Super Lig after a 26-year absence in the 2020/21 season and are intent on shaking the natural order of things in the Turkish top flight.

Who have they signed?

Mario Balotelli is obviously the name which jumps off the page initially, but there is the intention to build a squad around him that is capable of competing.

Benjamin Stambouli, once of Tottenham Hotspur, has been signed to play in defensive midfield, whilst Britt Assombalonga is expected to provide goals. Lucas Castro has brought in to bring some creativity, too.

What is particularly curious about these deals is that almost all have been free transfers, with the bulk of the outlay likely to come via salaries.

Jonas Svensson has joined from AZ Alkmaar, whilst Younes Belhanda arrived on a Bosman after his contract with Galatasaray expired.

David Luiz is expected to join too, which would give quite an experienced core of players, along with Gokhan Inler, who was at the club last season.

How is this being funded?

When a club with a lesser reputation goes on a recruitment drive like this, the immediate question people ask is 'where is the money coming from?'

That question doesn't have an easy answer in this case, with Adana Demirspor being a member-owned club, although much of the responsibility for recruitment has fallen on the shoulders of club president Murat Sancak.

Sancak is highly outspoken on social media, keeping fans updated with transfer news, and he is desperate to put together a team that can avoid relegation.

Having already detailed that much of the money to pay Balotelli's salary is coming from sponsors, you wonder just how concrete these investments are.

Balotelli's contract is a three-year deal, which could put Adana Demirspor in a perilous position if they are relegated in the 2021/22 season.

Sancak has also made clear that ticket prices and the cost of executive boxes will rise too as a way of helping the club fund these deals.

He is confident that fans will pay the higher money to see Super Lig matches after such a long time away from the top flight. Again, you worry that this is a gamble that could leave the club in dire straits in the future.

Is the club in good hands?

Stories about Sancak have been commonplace for years, especially given his close ties to the government of Recep Tayyip Erdogan in Turkey.

In 2015 he was the victim of an armed attack in Istanbul when two masked men rammed a vehicle into his car before opening fire on it.

Sancak escaped the attack, but it has since led him open to more invasive questions.

A report published by Cyprus Mail in June of 2021 suggested Sancak was involved in a group which sent aid and funds to jihadist organisation al-Nusra, often described as al-Qaeda in Syria.

Renowned Turkish mob boss Sedat Peker has accused the government of Erdogan of supporting the aforementioned jihadist group, even going as far to suggest Sancak was a key middleman.

"I'm not talking about deliveries consisting of several trucks, I'm talking about those worth billions of dollars, including crude oil, tea, sugar and second-hand cars," Peker explained.

"One then has to get the approval of pro-government businessmen Murat Sancak and Ramazan Ozturk."

Some rival fan suggestions that Adana Demirspor's transfer activity is merely a way of money laundering have no supporting evidence as yet, although it's clear that Sancak is a figure with close ties to the Turkish government.

We will have to see what further deals the club make, but it will be interesting to watch the club's progress in 2020/21, especially with their new-found ability to pay high salaries seemingly out of nowhere.