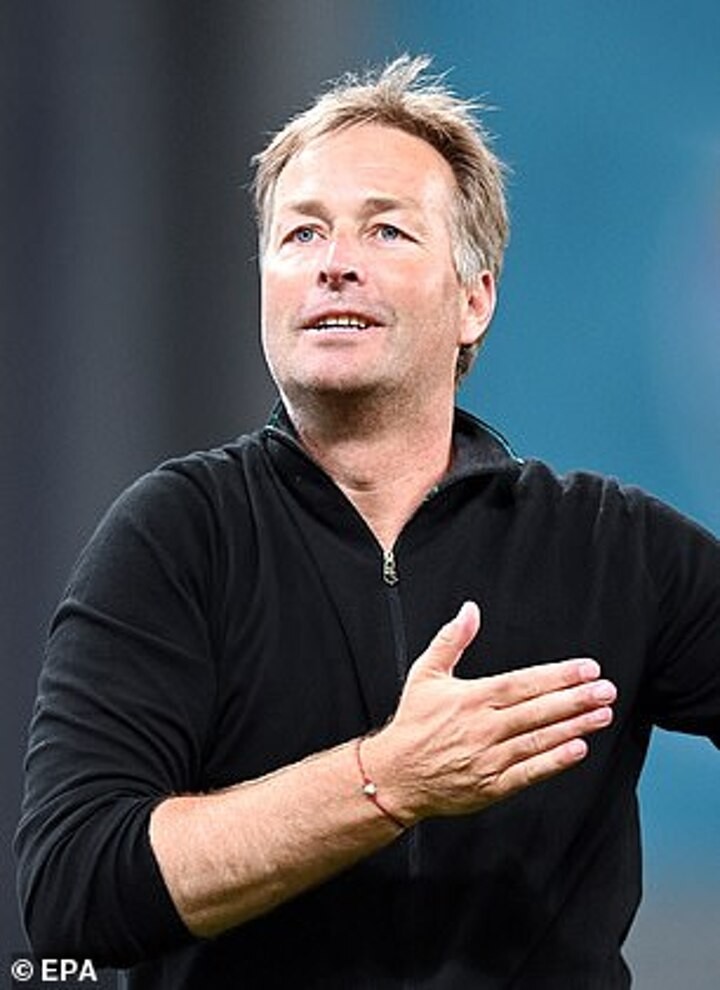 Denmark head coach Kasper Hjulmand has revealed he wore a bracelet with a silver football inside as a tribute to midfielder Christian Eriksen.

The Denmark midfielder collapsed during his side's defeat by Finland in their opening match of Euro 2020 and required 13 minutes of CPR on the pitch in Copenhagen after suffering an on-pitch cardiac arrest.

The 29-year-old was transferred to hospital and later fitted with a implantable cardioverter defibrillator (ICD) to regulate the rhythm of his heart before he was discharged last week.

Eriksen's team-mates meanwhile have progressed to the knockout stages of the tournament on goal difference after thrashing Russia 4-1 in their final Group B game in an emotional fixture in Copenhagen.

Pictures from the match of Hjulmand celebrating the win show he was wearing a thin bracelet with a silver football put in it, which he has now revealed was worn in tribute to the Inter Milan star.

'I have never gone with jewellery in my life,' Hjulmand said. 'This is the first time I'm wearing jewellery. There is a little football on it, 'he added, pointing down at his right wrist.

'It's Christian who's here, so we want to take him with us. I had him with me all the way. I think about him a lot.

'As I have always said, he is our heart, our rhythm. We smashed through for his sake today. He is a great inspiration for all of us.

'Not many of the players have played minutes on the pitch without Christian being in there. But we are super happy today. I am super grateful for the people and the support we have received.'

The country's future king Prince Christian also paid tribute to Eriksen by donning his namesake's shirt during the win against Russia.

Having initially worn a blue blazer, the young prince had changed his attire by the end and was wearing the Denmark No 10 shirt instead.

After the emotional scenes on Monday night, which saw Mikkel Damsgaard, Andreas Christensen, Yussuf Poulsen and Joakim Maehle all net, defender Jens Stryger Larsen revealed Eriksen had texted his team-mates after their win.

'Christian immediately wrote to us in our group. It is fantastic that he supports us and is there for us,' the Udinese right-back told the mixed zone after the match.

Denmark - who also lost to Belgium in the group stages - will now face Group A runners-up Wales in Amsterdam on Saturday 26 June in what promises to be a passionate second-round encounter.