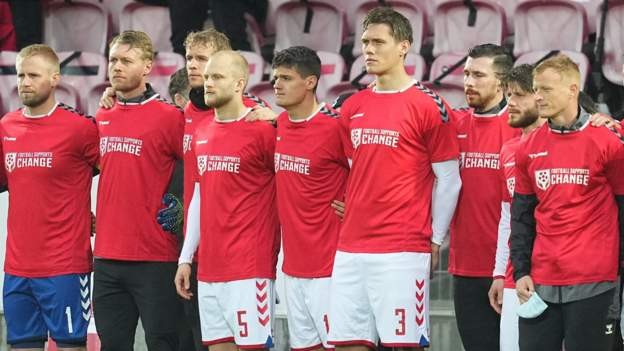 A sign reading '15,000 deaths in Qatar, hooray for the World Cup' was placed on The Little Mermaid statue the day after Denmark qualified for the tournament

Denmark will put "extra pressure" on Fifa over human rights concerns in the build-up to the 2022 Qatar World Cup.

Denmark's training kit sponsors will withdraw their logos to give room for messages critical of Qatar.

Commercial partners will also not travel to Qatar.

"The more who join a coalition of those who would like to see change, the more likely change will happen," Danish Football Association chief Jakob Jensen told BBC Sport.

Amnesty International released a 48-page report earlier this month claiming migrant workers are being exploited as they help to build stadiums and infrastructure for the tournament, which will take place in November and December next year.

Danish players wore shirts with "football supports change" on them before their qualifying match against Moldova in March.

He will travel to Qatar in December and speak to migrant workers and Qatari authorities.

"We have written to the Qatari authorities and to Fifa to explain the difference between the facts they present and the facts Amnesty presents," Jensen said.

"Our commercial partners have decided not to have their commercial on our training jerseys during the World Cup.

"We will also consult Amnesty on that."

England players, staff and fans have been urged by Amnesty to highlight human rights concerns during the tournament.

Jensen said it was for each country to decide if they should also protest.

"We have a very strong cooperation with all the Nordic countries," Jensen added.

"I have also had good dialogue with colleagues from other countries, for instance your own football association [the English FA], the Netherlands and Belgium."

The FA told BBC Sport on Tuesday that it was in "regular dialogue" with Amnesty International, Fifa and other member associations.

A spokesperson added: "From those discussions to date, we believe there is evidence of substantial progress being made by Qatar in relation to workers' rights. However, we recognise there is still more to be done.

"Our view remains that change is best achieved by working collaboratively with others, while always being mindful that we have our own challenges in this country."