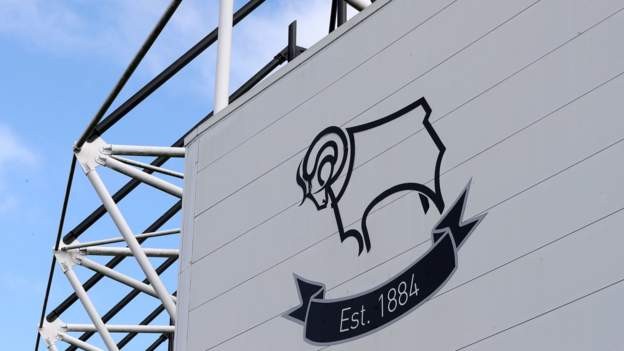 Derby have been docked 21 Championship points since going into administration

Derby's administrators could seek a legal ruling on their compensation battles with Middlesbrough and Wycombe if the Football League don't step back from their current position of the cases being regarded as football debts, BBC Sport understands.

Boro and Wycombe are both pursuing Derby for what they regard as a loss of income due to the troubled Championship club's financial rule breaches.

It is not felt within Pride Park there is much chance of the claims being successful.

However, the mere fact they exist is preventing the administrators from naming a preferred bidder for the club, which they said on Christmas Eve was "imminent".

It is understood none of the three current interested parties are willing to commit to buying the club, knowing they could be facing a liability running into millions of pounds.

The administrators had hoped to 'compress' the liability but unless the EFL changes the status of the debt, it cannot happen because all football-related sums must be paid in full.

The administrators are arguing the claims do not fall within the normal 'football-related' agreements over issues such as transfer fees and ticket sales.

However, the EFL say they do, in the knowledge that Middlesbrough's legal victory over Liverpool in 2002 over the transfer of Germany international Christian Ziege was regarded as a football debt.

The administrators feel the EFL's present rules are out of date because they don't take into account preferred creditor status.

Faced with a lengthy legal fight which could take months, during which time Derby will need to sell players or borrow more money to keep playing, the belief is if the administrators don't receive clarity within the next week, they will ask for a legal ruling.

The only other option is to reach a financial agreement with Middlesbrough and Wycombe, although where the funds for this would come from is not clear.

The idea of using funds intended to pay part of a £28m liability to HMRC has been dismissed as a non-starter.

The EFL has asked the administrators how they intend to continue trading to the end of the season amid increased fears for the club's future.

The added uncertainty comes at a time when the club are performing superbly on the field.

Saturday's win over Sheffield United saw Wayne Rooney's side move off the bottom of the table and eight points from safety, despite having 21 deducted this season.