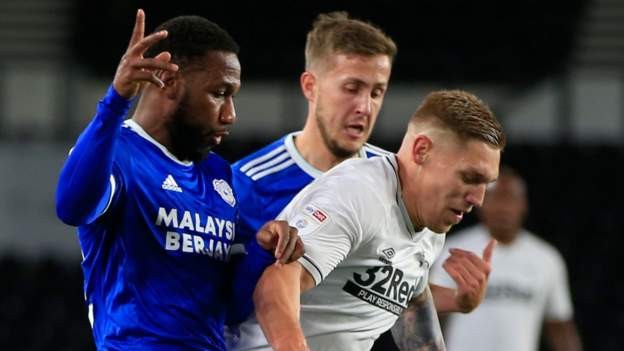 Waghorn made it two sweet set-piece strikes in as many games to put the Rams on course for only a second win in the Championship this season.

But Neil Harris' Cardiff are formidable opponents on their travels and, after twice hitting the woodwork, the Bluebirds stretched their unbeaten league run to five games thanks to Moore's cool finish.

Derby are left without a home league victory in seven matches stretching back to June, although the draw was enough to lift them out of the relegation places.

Cardiff, who are yet to lose on the road this season but have not won at home, climb to 14th.

This was the final game in which Derby's Wayne Rooney was absent due to a spell in self-isolation, while Cardiff were without their two mavericks - as Harris describes them - in Harry Wilson and Lee Tomlin.

Perhaps it was no surprise, therefore, that creativity was in short supply early on - but there was one set-piece specialist on the pitch.

Waghorn had put Derby ahead in last Friday's derby clash with Nottingham Forest thanks to a sparkling free-kick.

He repeated the trick here after Joe Ralls brought down Tom Lawrence just outside the D, curling the dead ball up and over the Cardiff wall and into the top corner of Alex Smithies' net.

Phillip Cocu's team grew in confidence on the back of their first home league goal of the season, and might have doubled their lead but for a fine Joe Bennett block to deny Kamil Jozwiak.

Cardiff offered almost nothing going forward until the 40th minute, when Moore got the better of Curtis Davies but headed Will Vaulks' cross against the outside of the post.

The hosts escaped again early in the second half as the lively Sheyi Ojo crossed for Junior Hoilett and he emulated Moore by heading against the upright.

Just as Derby began to think they may have done enough to hold on, Ojo threaded a lovely ball into the path of Moore and the Wales international finished coolly, rolling a shot under the advancing Kelle Roos and into the net.

It was Derby who came closest to a late winner, with Jason Knight slicing wide before Waghorn's shot was smothered by Smithies.

"I was a bit disappointed with the first half - we were the architects of our own downfall, turning the ball over too cheaply.

"We adjusted it slightly at half-time. We had a real calm conversation and we tidied it up a bit and second half I thought we were much better.

"A great free-kick goes in against us. You can't do a lot about them. But I am really pleased with the character to come from behind again.

"Ultimately we have hit the post twice and had the better chances."

Attempt saved. Matthew Clarke (Derby County) header from the right side of the box is saved in the centre of the goal. Assisted by Kelle Roos.

Leandro Bacuna (Cardiff City) is shown the yellow card for a bad foul.

Kamil Jozwiak (Derby County) wins a free kick in the defensive half.

Colin Kazim-Richards (Derby County) wins a free kick in the attacking half.

Attempt missed. Leandro Bacuna (Cardiff City) left footed shot from outside the box is close, but misses to the left. Assisted by Sheyi Ojo.

Sheyi Ojo (Cardiff City) is shown the yellow card for a bad foul.

Graeme Shinnie (Derby County) wins a free kick in the attacking half.

Sheyi Ojo (Cardiff City) wins a free kick in the defensive half.

Attempt saved. Martyn Waghorn (Derby County) right footed shot from the right side of the box is saved in the bottom right corner. Assisted by Colin Kazim-Richards with a headed pass.