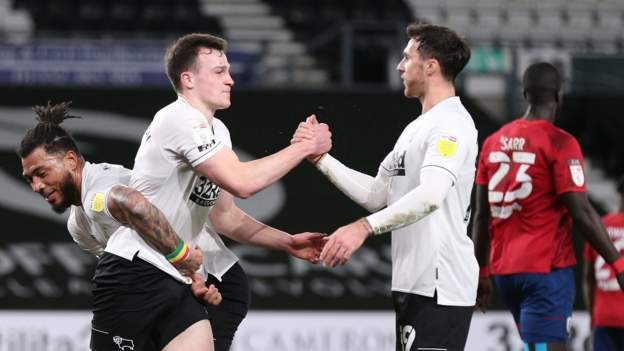 Derby County eased to victory over 10-man Huddersfield Town, who slipped to a seventh defeat from their past 10 Championship games.

The hosts led through George Edmundson after he headed home from Nathan Byrne's cross into the Huddersfield box.

Martyn Waghorn doubled Derby's lead after the break with a fine finish from the 18-yard line having been one-on-one with Terriers goalkeeper Ryan Schofield.

The visitors had Jaden Brown sent off late on for a second yellow card after he brought down Jason Knight.

The result continues Derby's improved form under Wayne Rooney's stewardship, with the Rams winning six of their past eight Championship games.

The Rams leapfrog Huddersfield into 18th place, with the visitors slipping to 19th after another defeat.

The Terriers, who came into the game on the back of a 4-1 win over Swansea, rarely threatened to get off the mark at Pride Park, with the hosts looking comfortable throughout.

Colin Kazim-Richards had a number of chances to get on the scoresheet either side of half-time, with Schofield saving his low strike first before his second effort after the break flew over the bar from long range.

Attempt saved. Martyn Waghorn (Derby County) left footed shot from outside the box is saved in the top right corner.

Jason Knight (Derby County) wins a free kick in the attacking half.

Martyn Waghorn (Derby County) wins a free kick in the defensive half.

Naby Sarr (Huddersfield Town) wins a free kick in the defensive half.