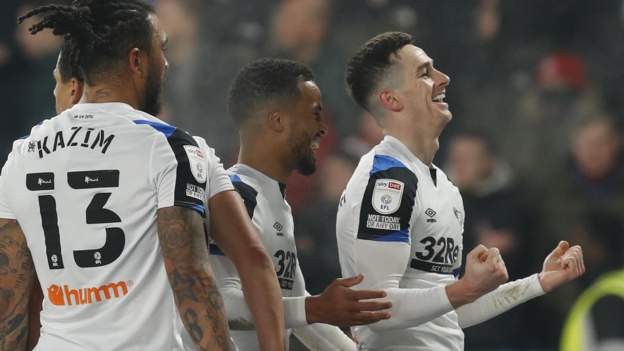 Tom Lawrence hit a second-half double to help troubled Derby off the bottom of the Championship table with victory over Sheffield United.

The Rams captain wriggled clear of a gaggle of defenders and then beat another two before beating goalkeeper Wes Foderingham with a left-foot finish to put the hosts ahead.

Wales international Lawrence then doubled the lead with a sensational second, curling a left-footed finish into the top corner after being teed up by Craig Forsyth.

The win - a year to the day since Wayne Rooney took permanent charge - lifted Derby above Barnsley on goal difference, despite the Rams having had 21 points deducted this season.

Rooney went into his anniversary match fresh from the second transfer embargo of his year in charge at Pride Park that has also brought two separate points deductions, failed takeover bids and administration.

This week, Derby's administrators were told to show the English Football League how they intend to fund the club until the end of the season.

Derby have responded well to setbacks this season - following their second points deduction of the season by beating promotion contenders Bournemouth - and the Rams showed the same spirit to secure a fourth win in an unbeaten five-match league run.

The Blades, who arrived on a winning four-match run, faded in the second half as the home side improved.

Chances remained at a premium until Lawrence stepped up with two fine goals in nine minutes, both with his weaker foot.

Derby's eighth win of the season moves them up to 23rd, eight points adrift of safety, while United's first defeat in six matches drops them to 14th.

Colin Kazim-Richards (Derby County) wins a free kick in the defensive half.

Attempt missed. Craig Forsyth (Derby County) header from the left side of the box is close, but misses to the right following a corner.