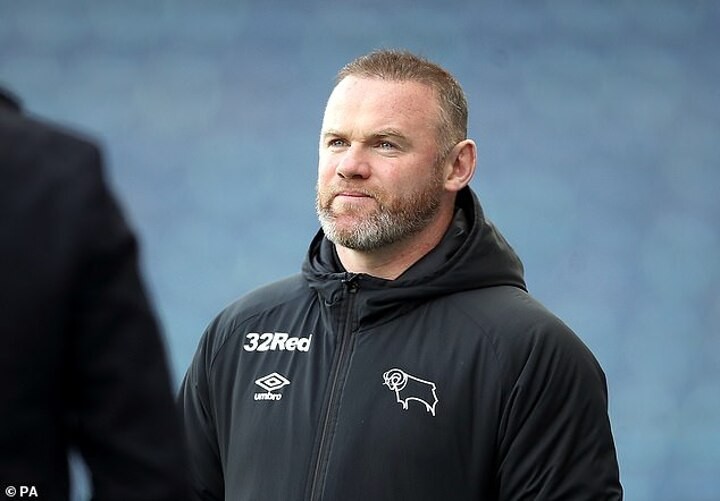 Derby players fear the impact the chaos at the Championship club will have on the future of manager Wayne Rooney.

England’s record goalscorer agreed a two-and-a-half-year deal as manager in January and affirmed his commitment to the Rams prior to their relegation decider against Sheffield Wednesday earlier this month.

And after the 3-3 draw that preserved Derby’s Championship status, Rooney said the club could not afford ‘any more mess-ups’.

Since then, the proposed takeover by Spanish businessman Erik Alonso has collapsed and Derby could face a points deduction — likely to be applied next season, if at all — for breaching financial regulations.

Though Rooney struggled at times during his first season as manager, he is generally liked by players who are desperately seeking some stability. No manager has lasted past the two-year mark at Pride Park since Nigel Clough, who departed in September 2013.

Rooney added: ‘We need clarity, especially the fans, on what’s going on. It needs to get sorted out as soon as possible.

‘I’m sure it will — we’re in a place where it looks like it’s going that way — but it has to happen quickly. We can’t have any more mess-ups, no more messing around.

‘We need everything to be sorted out to allow me to do the job to the best of my ability. It has been frustrating.’

Meanwhile, Derby supporters have written to owner Mel Morris and the club’s board demanding clarity on the future.

The Rams supporters have indicated they will refuse to buy season tickets if they are kept in the dark.