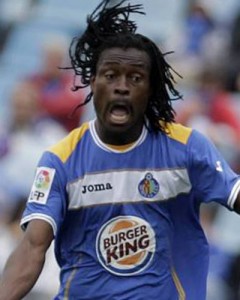 Ghana midfielder Derek Boateng has arrived in England, defying Getafe about a proposed move to Ukraine, to seek a move to the Premier League.

GHANAsoccernet.com understands that the enforcer touched down on Saturday apparently to hold talks with a club, most likely West Brom, who have expressed keen interest in signing him.

The 28-year-old's move is in direct defiance of his Spanish club who have already agreed a move for him to join Dnipro.

Boateng has refused to speak with the Ukranians over his personal terms as he is keen on a move to England.

His arrival in England signals that there is an imminent agreement over his move to the Premier League.

West Brom reportedly made a bid for the Getafe midfielder late last week.

However, the deal would be difficult with Getafe already agreeing Â£7million for Boateng with Dnipro while the English side are only willing to pay Â£4m.

Along with the West Brom interest, Sunderland and Stoke City are also suggested to looking at the Panathinaikos and FC Cologne man.