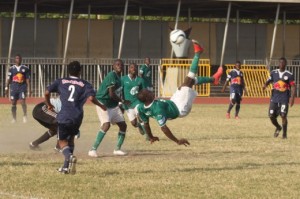 Ghana second tier side Pure Joy FC will travel to South Africa on Tuesday ahead of a scheduled friendly with PSL club Amazulu, GHANAsoccernet.com understands.

An 18-man squad with seven officials will constitute PJ's traveling party and will have four-clear days to train and acclimatize to weather conditions before the game itself on Saturday.

"I can confirm that Pure Joy will be traveling to South Africa on Tuesday to play an international friendly with Amazulu," the club's Public Relations Officer Nana Darkwa Gyasi told GHANAsoccernet.com.

"The team will leave Accra on Tuesday ahead of the game with the PSL club on Saturday."

The friendly is one of many pre-season programs put in place by management to adequately prepare the team ahead of the commencement of the 2011-2012 Division One League.

Pure Joy is bent on Premier League qualification in the coming campaign after tw0 failed attempts at Ghana's elite division.