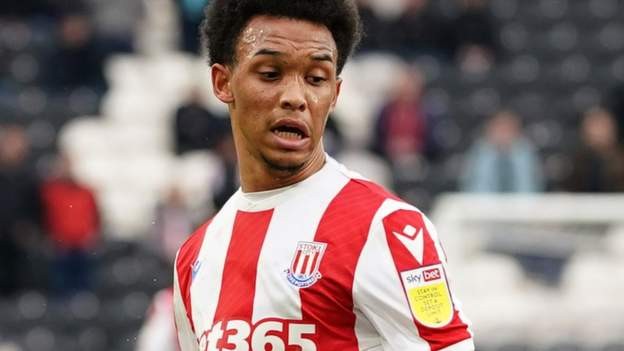 The 20-year-old son of Shaun Wright-Phillips and grandson of Arsenal legend Ian Wright was one of several new boys to catch the eye in Sunday's 2-0 Championship victory against Hull City.

But Wright-Phillips Jr was the one chosen as man of the match.

"He has great technical ability and is so direct," Holden told BBC Stoke.

"He wants to take you on the back foot and look for opportunities to exploit defenders.

"His link-up play takes up those positions off the back of the opposition midfield. I'd hate to play against him."

Stoke signed Wright-Phillips in February 2021 after the winger had come through the academy at his father's old club Manchester City.

Andy Cousins, a member of Stoke boss Michael O'Neill's backroom team, used to work with Wright-Phillips at Man City - which gave them a head start in enticing him to the Potteries when he became available.

A much-changed Stoke side saw Covid-hit boss O'Neill also stick with Jack Bonham in goal, in preference to Adam Davies, who had been the Potters' first-choice keeper in Championship games for the previous two months. Midfielder Lewis Baker, signed on Saturday from Chelsea, also made his debut from the bench late on.

But it all added up to play-off hopefuls Stoke's best performance for months, taking them back within four points of the top six ahead of Saturday's visit of leaders Fulham, at a time when their promotion credentials had been questioned.

"The lads' performance probably made it quite easy for the gaffer to watch on his sofa," said Holden. "But that's testament to the work he has put in since being here that it can happen when he hands things over.

"We could have scored more goals if we'd been a bit cuter with the final pass, but we still created enough big chances and, with three players making their debuts in Phil Jagielka, Taylor Harwood-Bellis and Lewis Baker, who we were all very pleased with, it was a perfect afternoon.

"It's not been an easy week but they all settled into the team and had a good impact.

"Phil's only been in the building two days. But he's been around the block. The two old boys at the back, him and James Chester, looked after the youngsters.

"And full credit to Tom Ince. He's a great example for every player in the squad because he's always one of our best trainers whether he's in the team or not and you get your reward when you work like that every day. He played in a slightly different role, but all of the midfield three gave us energy."

Can there ever have been an occasion when a team had three debutants, with the combined age of two of them adding up to the third?

In this scenario, Wright-Phillips, 20, and Harwood-Bellis, 19, made their Stoke bows alongside 39-year-old Jagielka.

It was a case of squaring the circle for Jagielka.

He made his league debut for Sheffield United against Swindon on 7 May 2000, the day after Wright-Phillips' grandad played his last game in English league football, for Burnley at Scunthorpe.

It was also a case of joining up the dots for D'Margio's father, Shaun Wright-Phillips, who Stoke tried to sign back in 2011.

In a Stoke side that already includes Ince (son of former England skipper Paul) and Tyrese Campbell (son of Kevin, a former-team mate of Wright's at Arsenal), the Potters dads (and grandad) now appear to be just a keeper short of a famous five-a-side veterans team.

The illustrious quartet of Ian Wright, Shaun Wright-Phillips, Paul Ince and Kevin Campbell now all have an added interest in Stoke City games this season