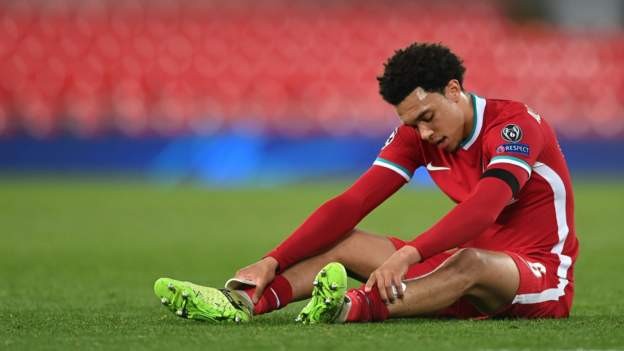 Liverpool's all-conquering season that brought them the club's first league title in 30 years seemed an age away as they were eliminated by Real Madrid in the Champions League quarter-final at a deserted Anfield.

Jurgen Klopp's side, who carried all before them in the league last season, are now left with only the Premier League's top four - and a place in Europe's elite competition next term - to aim for if they are to salvage something from this fragmented, disappointing, injury-hit campaign.

As Zinedine Zidane's players celebrated a professional job that saw them set up a Champions League semi-final against Chelsea, Klopp was left to ponder Liverpool's fall from grace in the past 12 months.

He will no doubt face calls from frustrated Reds fans to revamp a squad that has served him and the club magnificently in recent seasons - indeed the social media jury was already delivering that knee-jerk verdict moments after elimination.

The manager, quite rightly, will guard against over-reaction. Liverpool have achieved too much and have too many high-class players for that - but that does not mean he does not have serious questions to consider.

So does this Liverpool squad really need a major overhaul, or just minor renewal?

A team as good as Liverpool have been seems an unlikely candidate for an extensive rebuild - but fresh faces can create momentum, renewal and a new mood, and this group has been together a long time.

When Liverpool and Real met in the Champions League final in Kyiv in 2018, Klopp's line-up included seven of those who started at Anfield on Wednesday.

And in those intervening three years Liverpool have continued to lean heavily on those seven starters from Kyiv on all fronts.

They have been carrying a very heavy workload for a long time and while the likes of Diogo Jota, who has been excellent, and Thiago Alcantara, who has not, have lightened the load in phases this season, Liverpool's squad and best starting line-up still has a very familiar look to it. It is inevitable it has taken its toll.

Injuries have been the backdrop to all of Liverpool's efforts this season and their inspirational leader - and one of the world's finest central defenders - Virgil van Dijk is expected to be fit for the start of next season after the serious knee injury that has kept him out since September.

Joe Gomez, another fine talent, should also be back after a similar injury but there is no question a central defensive reinforcement is required. It remains to be seen whether it will be Ozan Kabak, currently on loan from Schalke, or RB Leipzig's outstanding 24-year-old Ibrahima Konate. Nat Phillips has been excellent but Klopp needs more strength and quality.

Klopp has plenty of resources in midfield but Georginio Wijnaldum's reluctance to sign a new contract points towards his departure while Jordan Henderson, still a huge influence at 30, has been sorely missed in his injury absences.

Thiago was meant to be a tempo-dictating game-changer after arriving from last season's Champions League winners Bayern Munich but he has struggled, and it was significant that he did not start in either leg of this quarter-final when these looked like the sort of games he had been signed to play in.

Liverpool are relaxed about any speculation on Mohamed Salah's future. The Egyptian is 29 in June but is still of such world class that he would command a huge fee. It would be a major shock if any situation developed where he left Anfield this summer.

The complications may arise if Liverpool fail to reach next season's Champions League, a real possibility as they currently stand sixth, three points behind surprise package West Ham in fourth.

The idea of dropping into Europe's lesser competitions may exercise the minds of the likes of Salah.

Jota has been a major success since his £45m summer arrival from Wolves and Liverpool will look to him to offer competition, respite and support for their main three forwards next season - although Roberto Firmino's indifferent form means he may face a real fight for his place from the Portuguese.

But even if Liverpool do not finish in the Champions League places this is a time for measured judgements and careful recruitment, rather than for tearing down the monument to success that has brought Klopp and his players the European and domestic glory in the two preceding seasons.