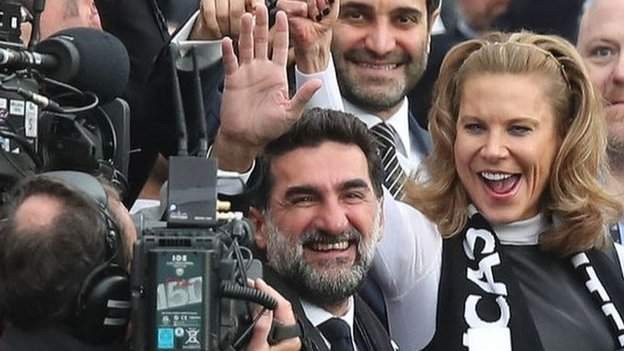 Newcastle were bought for £305m by PIF, who have have assets of £250bn

Newcastle United became the latest in a long line of Premier League clubs to experience a high-profile takeover recently and excitement on Tyneside is high.

But amid talk of forthcoming challenges for the Premier League title, there is the stark reality the Magpies are 19th in the table and winless this season.

Nineteen of the current 20 Premier League teams have been taken over during the 21st Century, including every club to have won the title in that time.

So what can Newcastle's owners and fans learn from those previous buyouts, the money involved and the transformation in fortunes that have followed?

With the amount of money potentially available to Newcastle, takeovers such as Manchester City and Chelsea are obvious comparisons. But these clubs were not battling against relegation when their new owners came in and the Magpies have only finished higher than 10th once in 15 seasons.

Those two clubs, along with Leicester, Liverpool and Manchester United, have all won the title after a takeover, but others have struggled even to break into the European places on a regular basis, including Everton, Aston Villa and West Ham United.

In theory there should be a simple formula - change manager, change players, continue to spend - but is that the right approach?

The five victorious clubs, on average, switched managers 10 months after the ownership change, excluding United with Sir Alex Ferguson, who continued until his retirement.

None of these clubs sacked the incumbent manager as quickly as Newcastle's new regime dispensed with Bruce.

Once those changes had been made at those five clubs, the new owners' appointments fared better, lasting an average of 35 months. For the others that underwent takeovers, the incumbent managers were gone in six months on average, while their replacements lasted only 13 months. Perhaps that should serve as a warning to the incoming Newcastle boss.

While successful clubs seem to give managers more time, the title winners have all had a high turnover of players immediately after the takeover. Chelsea, Manchester City, Liverpool and Leicester all moved on more than 50% of their core first-team squad within two seasons.

There is inevitably impatience from the boardroom to see a return on some very large investments but history suggests the immediate effects of a large-scale squad overhaul tend to be modest, with little change in league position. Money needs to be spent season after season:

After one title, owners tend to want more, but what is the cost of maintaining their place at the top of the table?

Chelsea and the two Manchester clubs have all won five titles since being taken over, although the United figures should be prefaced by the fact Ferguson already had the Red Devils as a powerhouse club at that time. Chelsea had been waiting since 1955 for the crown and City since 1968.

The only team to climb up from outside the top half of the Premier League has been Leicester and since their 2016 win they haven't been able to finish any higher than fifth. It might be a cliche to say that staying at the top is harder than getting there in the first place, but there is some truth to it.

Newcastle's immediate priority of course is to stay in the Premier League.

It could take significant investment just to avoid the drop, but beyond that, what size cheques will need to be written?

A more modest Newcastle aim would be to get into the top four, but that will mean a rise of 15 places and, if the previous clubs' spending and the rate of transfer inflation are anything to go by, a net spend in excess of £1bn will be required.

In six years it will be a century since Newcastle's last title triumph. The new owners have the funds to challenge before then. But it remains to be seen if they wish to use that amount - and whether they are allowed to.