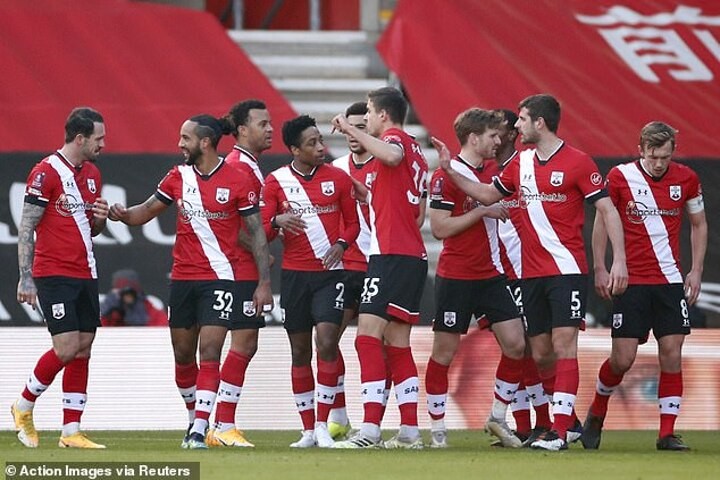 It isn't too often that two teams play each other twice within the space of four days.

But Southampton and Arsenal are very well acquainted with Tuesday night's meeting actually their third in the space of six weeks following a 1-1 league draw in mid-December and Saturday's 1-0 FA Cup win for the Saints over the holders.

Ordinarily, you'd think facing the same opponents again would make life easier for a manager and their legions of technical staff behind the scenes.

But Southampton's Ralph Hasenhuttl will come up against a very different Arsenal team on Tuesday after Mikel Arteta rotated heavily in Saturday's loss.

Normally, managers leave out the more established players and play the kids in the early rounds of the FA Cup, but Arteta rested the likes of Emile Smith Rowe and Bukayo Saka and paid the price for changing things.

Nicolas Pepe and Willian were among those who endured forgettable afternoons as Arsenal seemed overwhelmed by the intensity of Southampton's play, ultimately succumbing to a Gabriel own goal.

So will Southampton be able to repeat the trick on Tuesday night, or will Arsenal take the points?

So this will be a very different Arsenal line-up?

In all likelihood, yes. Expect Arteta to restore the likes of Thomas Partey, Smith Rowe, Saka, Kieran Tierney and Alexandre Lacazette to his line-up.

Pierre-Emerick Aubameyang will miss out, however, for family reasons once again.

Arsenal did improve in Saturday's cup tie when Partey, Saka and Lacazette came on during the second-half. They had greater creativity and incisiveness, passing up chances to force extra time.

Hasenhuttl went for a full-strength team on Saturday which shows that he does consider winning the FA Cup a possibility this season.

And why not? Not only will a more open and unpredictable Premier League title race distract the attention of the top clubs, Saints find themselves in a comfortable position.

They've come on leaps and bounds since their flirtation with the relegation zone 12 months ago. Sitting a place and two points above Arsenal in 10th, with a game in hand on the Gunners, they won't be sucked into a relegation fight but realistically won't make the top four.

So why not prioritise reaching a first FA Cup final since 2003? The club would also qualify for next season's Europa League, a solid sign of progress for Hasenhuttl, and pocket over £3million in prize money, which seems small but could be handy at the moment.

That explains the strong team selection against Arsenal on Saturday, the win earning a visit to Wolves in the next round. On the flip side, it means their players won't be as fresh as Arsenal's.

Injuries are also biting for Southampton with Kyle Walker-Peters and Oriol Romeu among those sidelined. Ryan Bertrand is also suspended.

Does Hasenhuttl have Arsenal's number?

Well, yes and no. In terms of pure head-to-head meetings this season, Southampton are currently shading it after the 1-1 league draw at the Emirates in December and Saturday's Cup success.

But then there's the caveat that Southampton didn't face a full-strength Arsenal side at the weekend.

They did in December, however, and caused them no end of problems. Theo Walcott scored against his former club to hand them an 18th-minute lead on a night when Southampton could have topped the table before Nathan Redmond hit the crossbar.

Arsenal fans would argue that was a very different Gunners team in terms of confidence, entering that match as they did off the back of three straight league defeats and barely above the relegation zone.

Since then, they've beaten Chelsea, Brighton, West Brom and Newcastle to climb to mid-table and restore confidence. Saturday's defeat was their first in six.

Arteta finally seems to have stumbled upon a formula that works, with 20-year-old Smith Rowe offering some much-needed creativity and Saka's bright season continuing.

They had also kept five consecutive clean sheets in all competitions prior to Saturday with Rob Holding and David Luiz anchoring things at the back far better than six weeks ago.

You can expect Hasenhuttl's side to cause Arsenal problems though. On Saturday, Arsenal looked blown away at times by the energy and intensity of their opponents, especially in the first-half.

Working in packs with a high press, Southampton pounced on any slack Arsenal pass and there was much to be admired about their clever movement and precision on the counter.

Southampton have also troubled quite a few opponents this season from with their set-piece routines so there will undoubtedly be plenty to keep Arsenal's defence occupied.

Do Southampton actually have enough firepower to win?

Much was made of Southampton's 1-0 win over Liverpool at the start of the month but that Danny Ings winner in just the second minute has been the exception rather than the rule of late.

In their five Premier League games since the draw at the Emirates, that is the only goal Southampton have mustered. They drew a blank in a 1-0 home loss to Manchester City, then played out two goalless draws against Fulham and West Ham over Christmas.

The win over Liverpool, which literally reduced Hasenhuttl to tears on the touchline, was followed by a 2-0 defeat at Leicester.

There's a definite feeling over over-reliance on Ings, who has seven for the season, and to a lesser extent, the precise free-kicks of James Ward-Prowse.

The winner on Saturday was heavily deflected after Walker-Peters just drilled a cross into the Arsenal box but it proved enough to settle the contest.

Mind you, they have still scored more league goals than Arsenal this season even if their early season scoring touch has deserted them of late.