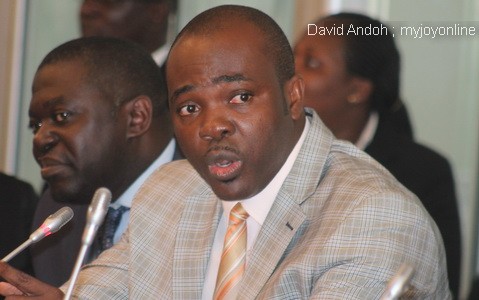 The minority in Ghana's parliament has summoned the country's Sports Minister Isaac Asiamah to answer questions over the humongous $15 million to execute Ghana's 2019 Africa Cup of Nations campaign.

The opposition NDC party wants the Minister to reveal the amounts of taxpayers money to be spent on the Black Stars after dodging attempts to reveal the exact amount government intends to spend on the tournament in Egypt.

The ruling NPP party had vowed in its election campaign promise to slash Ghana's financial expenditure on the Black Stars in the face of grinding poverty facing the ordinary taxpayer.

However insiders say the Ministry has sneakily approved $15 million to be spent on the lavish trip to Egypt in the tournament that the winner can only receive $4.5 mlllion.

This means the country will wrack up debts of about $10 million in executing the campaign but the Ministry has been evasive despite promising Ghanaians it would be open about budgets.

This has sparked Kobena Woyome, a ranking member on Youth, Sports Culture Committee in parliament to table a motion with the Speaker of Parliament to ask Hon Asiamah to appear to before parliament to answer questions over the highest budget any African country has ever prepared for the AFCON.

“ We raised the issue but we were told it will be in the mid-year review. I'm surprised the current government is doing the same things he campaigned on.

"I have filed an urgent question for the Minister of Youth and Sports to come to Parliament and disclose to the house the budget for AFCON to Ghanaians”, he added.

“The right thing to do is that every Ministry’s Budget is suppose to come to Parliament for a review so we know of the expenditure. So it is a right call that the budget must be known by Ghanaians,” he concluded.

Knowing that this budget will generate a huge public outcry, the Sports Ministry is refusing to tell Ghanaians about the budget for the tournament.

According to the source, Hon Isaac Asiamah's ministry has budgeted to spend $9 million on the Black Stars including their mammoth appearances fee of $80,000 per person, $10, 0000 for each player and official with rest of the money going into air travel, hotels and medical expenditure.

The government is also planning to spend $3.7 million in sending 100 supporters to Egypt to cater for their air fares, hotel accommodation and per diems.

A further $2.5m has been budgeted for 55 media personnel to be sponsored to the tournament - a concept craftily designed to buy their silence to mask the plundering of meagre state resources to fund the campaign that can only generate the country $4.5 million if the Black Stars win the trophy. This means a debt of $10 million will be wracked even if Ghana wins the title.

The insider further revealed that parts of the budgets for the supporters and media will be massaged to be spent on 'ways and means' and spiritualism in a highly spiritual campaign.

Ghana have already been given $260,000 for AFCON 2019 preparation by the Confederation of African Football (Caf), as the continental governing body gave the same amount to all 24 participating teams.

Ghana is drawn in Group F with Benin, Cameroon and Guinea Bissau.