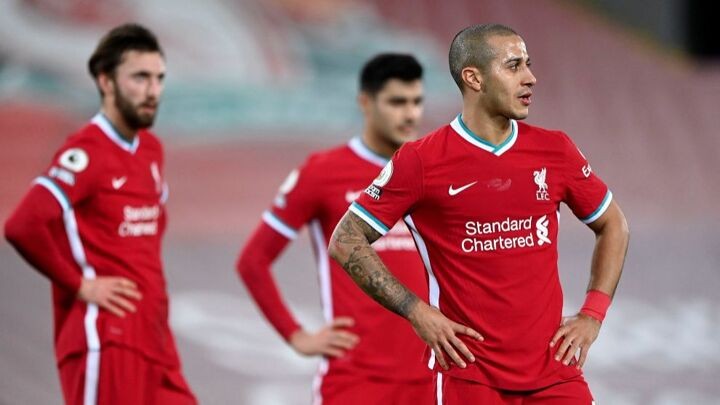 Thiago Alcantara has yet to live up to the expectations following his summer move to Liverpool from Bayern Munich and has recently been at the receiving end of criticism from British media pundits.

The Spain international joined the Reds to provide the spark they may have lacked in midfield in previous seasons and offer them an alternative way to create chances in attack.

His incisive long and short passing has resulted many to considering him as one of the most agile midfielders in European football after leading the Bavarians to Champions League glory last summer. However, Thiago has yet to adapt to the Reds in a season where he has not registered any goal or assist after 16 games in all competitions.

The 29-year-old midfielder missed out on several games in the first stretch of the 2020/21 campaign due to COVID-19 and a knee injury, one which sidelined him until late December.

Thiago managed to establish himself in the starting line-up soon after his return to action, but Liverpool have struggled to deliver in 2021.

With virtually all their first team centre-backs ruled out due to various injuries, Klopp opted for emergency solutions, placing either Fabinho or Jordan Henderson - or both - in defence.

Klopp hit out at critics

Following criticism towards Thiago from the British media, Klopp broke down the reasons behind his summer signing's struggles to stand out this season.

The German coach stressed that Thiago was unlucky in the first stretch of the season and returned when Liverpool faced issues due to their numerous injuries.

"He came in late, which is just the nature of some transfers, then he got COVID, got injured, and still had to adapt to a new team - and a team which was not exactly flying with no problems at all," Klopp explained back in February.

"We've had to rebuild the team pretty much every three days because of changing the last line and changing a lot of things, so that's just really unlucky for Thiago.

Is Thiago a good fit?

Thiago arrived at the Merseyside after Liverpool won their first Premier League title in 30 years, joining an already successful side, one which has won the domestic title and a Champions League in the space of two years.

For many, he was the missing piece to complete a Liverpool midfield which was renowned for their ability to execute Klopp's so-called gegenpressing philosophy.

However, in some recent remarks, former Manchester United midfielder Paul Scholes claimed that Thiago is not the kind of player who fits Liverpool's system.

"The way Liverpool play with the three in midfield, I don't think [Thiago] has great legs about him, so that central role would suit him down to the ground," Scholes told Premier League productions.

"Once you are in a wider position in the three, it's very difficult to get around the pitch because he's not that type of player.

"He just needs to be sat in the middle, controlling things, bringing players into play and that's what he's good at - I just wonder if this way of playing that Liverpool play is suited to his style of football.

"He doesn't seem a Jurgen Klopp type player, does he? You think of the midfield players he has got and the forward players. Everything is 100 miles per hour."