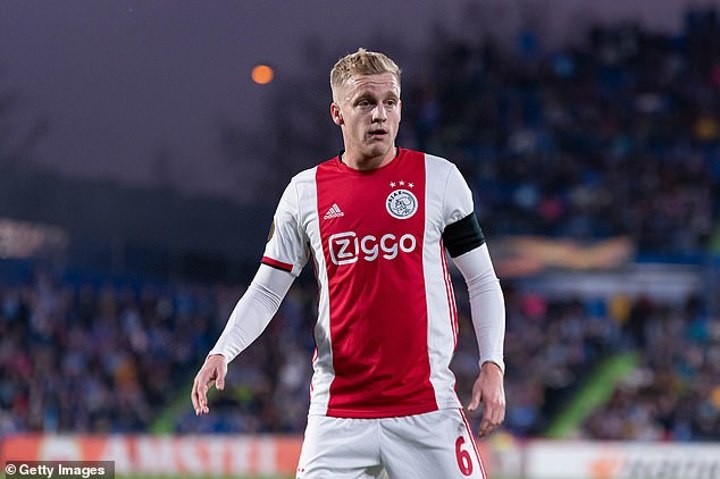 Ajax midfielder Donny van de Beek has insisted that a deal to join Real Madrid is not done - handing Manchester United a major boost in their pursuit of the talented Dutchman.

The Old Trafford hierarchy reportedly accepted that hijacking van de Beek's switch to Spain may prove a challenge, but could reignite their interest after the 22-year-old confirmed his future still remains uncertain.

Reports stated that van de Beek had already agreed terms with the LaLiga title chasers and would join them at the end of the season.

The Holland international was even expected to switch to Madrid last summer, but remained at Ajax after the Spanish giants failed to offload Gareth Bale or James Rodriguez.

Amid increasing rumours that a move to the Bernabeu still beckons, van de Beek has clarified his future.

'Playing in the sun is always nice, but no, I haven't started taking Spanish classes,' he insisted in an interview with magazine Helden.

'I still haven't said "yes" to anyone, it's all open. I know what I have here, I'm loved by Ajax and I love Ajax.

'My feeling should be positive at a club, not only that they want me but also that I fit in their system of play.

'Of course, I also want to know the game time they will give me.'

The star's ability to help link up attacking play has made him one of the most coveted propositions in Europe.

And the midfielder has continued his electric form, having scored 10 goals and provided 11 assists so far this campaign at club level.

But Van de Beek previously confirmed that he was in no hurry to seek a move away from the Eredivisie.

'Nothing is official (with Real Madrid). There is no contract. That is the situation. That has not changed throughout the season,' he said.

'I don't want to choose. Both are great clubs, but as I said before, Ajax is also a great club.

'Therefore, there is nothing to choose from. Everything would be very good.'