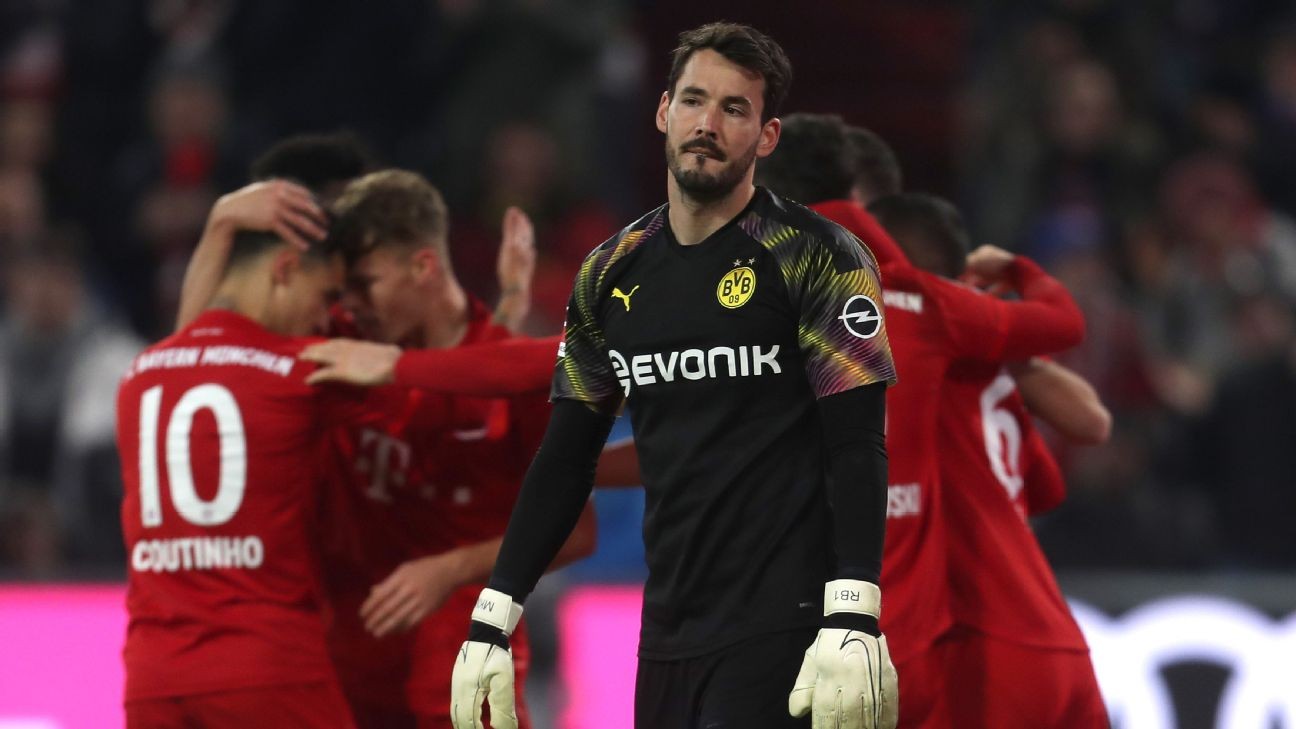 The German Bundesliga's return to action following the coronavirus shutdown has been successful so far, with goals galore and plenty of plaudits for their safety protocols and preparation to boot. Tuesday's game at Signal Iduna's Park is the biggest one yet, as Bayern visit Dortmund (Kickoff: 12.30 p.m. ET/5:30 p.m. ET GMT) in a battle of first vs. second atop the table. (The pair are separated by just four points with seven games remaining.)

Dortmund will fancy their chances at home against the defending league champions but recent history favors Bayern as they've won nine of their previous 15 Bundesliga meetings.

Which high-powered attack will reign supreme? Will this game settle the title race for this season? We break down the players, tactics and history you need to know ahead of a must-see fixture.

Jump to: What's at stake | History of the rivalry | Tactical battle | Players to watch | Flick has a point to prove | Score predictions

What's at stake in Tuesday's match?

In any normal season, Der Klassiker is regarded as one of the world's top matches, but when you have the Bundesliga as the only active top European league because of the coronavirus, suddenly the grudge match gets an even bigger billing. It does not have the same sociopolitical wider ramifications of Spain's Barcelona-Real Madrid El Clasico, but at its heart is a sporting rivalry where traditionally Bayern Munich have been the bigger brothers over Borussia Dortmund. And Dortmund, with their band of brave young things, are tired of that.

There is a lovely, simmering rivalry between the two these days. They are undoubtedly the two best-known teams from the Bundesliga and at its heart is a mouthwatering title race. Bayern are currently four points ahead at the top, chasing their eighth straight title. (The two teams are responsible for the past 10 Bundesliga crowns.) But Borussia Dortmund are playing with a wonderful confidence and the ruthlessness shown by championship-winning teams. Both have picked up two wins from two since the league resumed, and they boast two of Europe's best strikers in Robert Lewandowski (Bayern) and Erling Haaland (Dortmund).

Dortmund have struggled to keep hold of their bigger names in the past and have lost some to Bayern Munich -- Mats Hummels and Mario Gotze both moved to Bayern, only to find the grass wasn't greener, eventually returning "home" to Dortmund's famous yellow Wall of supporters. Now, with outstanding players throughout both teams -- Bayern's stunning left-back Alphonso Davies facing off against Jadon Sancho and Achraf Hakimi is attraction enough -- you will get to see some of the sport's dominant players and the future of the U.S. men's national team in Giovanni Reyna.

So with the rest of Europe's top leagues in hiatus and the sport's attention on the Bundesliga, this is without doubt the best match you will see anywhere in the world. Though Dortmund's Signal Iduna Park will be quiet due to games happening behind closed doors, don't expect to be wanting for intensity or dedication. A win for Dortmund will up the ante in the title race, but if Bayern edge to victory, the Bundesliga will be theirs to lose.

There is still time for chops and changes in this season's turbulent narrative, but both teams will want to write their own chapters come Tuesday evening as the league's box-office fixture takes centre stage. -- Tom Hamilton

The history of the Bayern-Dortmund rivalry

While many fans can still remember how Jurgen Klopp's Borussia Dortmund side was challenging Bayern to the point that they even met in the 2013 Champions League finale, the rivalry started roughly two decades before that historic match at Wembley Stadium.

After years of mediocrity and relative obscurity, Borussia Dortmund burst onto the European soccer scene in the mid-1990s, winning back-to-back Bundesliga titles and facing Juventus in the 1993 UEFA Cup final. Despite losing against the Italian powerhouse, BVB's share of the prize money allowed them to buy several top players from Serie A and soon overtake a struggling Bayern Munich side.

With their energetic fans and star-studded squad, Dortmund became a serious threat to Bayern's domestic dominance. Even though their time on top didn't last -- they finished 10th in the league after their 1997 Champions League win and were on the brink of insolvency in the mid-2000s -- the matches between the two teams continued to be highlights of every season.

Once Klopp arrived at Dortmund in 2008 and led the club to new heights -- they'd win consecutive league titles in 2010-11 and 2011-12 as well as another run to the Champions League final in 2013 -- the rivalry with Bayern began to draw international attention, something other rivalries in German football never achieved. The distinct playing styles and way the clubs have portrayed themselves put the rivalry on another level. Bayern's possession-heavy football and methodical approach on the field perfectly corresponds to how they intend to do business off the field, while Dortmund's high-intense, counter-attacking style is a reflection of their underdog attitude.

After Klopp left Dortmund in 2015, the rivalry has not been the same: Bayern are used to dominating Dortmund head-to-head, just like in their 4-0 win last November, but BVB have once again been able to assemble a roster of young and hungry players who are determined to make Tuesday's match another one for the history books. -- Constantin Eckner

Tactics: Who has the edge?

Borussia Dortmund were maybe the most delightfully unstable team in the league during the first half of the season. Their ball-dominant, high defensive line system has been all-or-nothing: they've both produced 12 clean sheets and given up three or more goals in a match on six different occasions. Since the winter break, however, that ratio has improved: six clean sheets and giving up three-plus goals only twice in 10 matches.

There are two ways you score on Borussia Dortmund at this point: set pieces or quick, vertical strikes. BVB have given up 12 goals in 11 German matches since the break (10 in the Bundesliga, one in the DFB-Pokal). Ten of those 12 goals came in matches against Augsburg, Werder Bremen and Bayer Leverkusen, teams that have scored 42%, 31% and 27% of their goals this season respectively on possessions with two or fewer passes. All three of Augsburg's goals came on quick, vertical attacks, and Leverkusen and Bremen managed one each in similar fashion.

Bayern's 4-0 home win over BVB in November didn't really follow this script. Serge Gnabry did score on a lovely counter-attack, but two Lewandowski goals were produced from beautiful passing in tight spaces, and the fourth came on an own goal. No one else has been able to take apart BVB's defense like that since; at the time, no team except Paris Saint-Germain in the Champions League has held them scoreless. Since adding Haaland in January, they've scored a whopping 35 goals in those 11 German matches.

It sure feels as if Borussia are a dramatically different and more stable team since the break. Now they get the ultimate chance to prove it. -- Bill Connelly

The players to watch

Lewandowski has been on fire when facing his old club Dortmund. The best Bundesliga player of the past decade has scored 16 goals in only 11 league games against the team he led from 2010 to '14. He scored at least two goals in his past four outings against BVB and has been on target in every Bundesliga match since a 1-0 defeat at the Westfalenstadion in November 2016.

On the defensive side, Dortmund's hopes rest on Hummels. The 31-year-old 2014 World Cup winner has only ever played for Borussia and Bayern, from where he returned to the Westfalenstadion last summer. Leading BVB's back three, he has been responsible for a new-found stability at the back. BVB had conceded 32 goals after 21 matchdays, but only Borussia Monchengladbach was able to beat them once in the six matches that followed. BVB won all of them.

However, Hummels is facing a race against time after leaving the pitch early with Achilles tendon problems in Saturday's 2-0 win at Wolfsburg. Should BVB's defensive leader not feature, all Dortmund hopes rest on the exciting attack where wunderkind Haaland and England international Sancho have provided for excellent entertainment in 2020.

For Bayern, young Canadian winger/wing-back Davies could be the difference-maker. Playing against the attack-minded wing-back Hakimi and ageing defender Lukasz Piszczek, his speed will be hard for Dortmund to control. And don't forget to keep an eye on Thomas Muller, who has hit his best form in several seasons under coach Hansi Flick. -- Stephan Uersfeld

Is this the game in which Flick shows he belongs at Bayern?

It says quite a lot that this is not the toughest test yet for Bayern's freshly-minted permanent manager. That came when Bayern Munich travelled to London for a Champions League group stage game against Spurs, following back-to-back league defeats against Leverkusen and Gladbach.

At the time, the suggestion of Flick as permanent head coach was little more than a whisper on the wind. Since then, Bayern have not lost a game and drawn only once. They embarrassed Tottenham that night, schooled Chelsea in the first leg of their last-16 encounter and have scored four or more goals in six games since mid-December.

In Flick's 22 games in charge, Bayern have collected 58 points, scored 69 goals and conceded only 14. They have been, as the Germans might say, in "Topform."

What's his secret? It's all about organization. Flick has got Bayern pressing in unison, while making their formations and movements more compact and coordinated than they were prior. Flick's astute tactical knowledge has put Bayern back at ease, comfortable and confident in their mission.

Flick was Joachim Löw's assistant coach during Germany's famous World Cup victory in 2014, and that work is worthy of note. Not only does the core of Germany's team play their football at Bayern, but the club is equally as large and demanding. Handling egos, managing confidence and meeting unrealistic expectations is a massive part of both jobs. The resurrection of Muller, who looked lost under previous coach Niko Kovac, the progressing importance of Leon Goretzka in midfield and the unleashing of Davies' prodigious talent and pace down the left flank proves that Flick is quite the master at all of it.

Flick is a man somewhat shy in front of the cameras, and he might lack the charisma often demanded from a Bayern head coach, but the boardroom probably will be delighted to have a man keen on just doing the work.

A lot has changed since Flick, in just his second game in charge, guided Bayern to a 4-0 win over Dortmund in November 2019. For Flick though, the real test lies beyond containing Haaland and 90 minutes against Borussia Dortmund. Remarkably, it lies in trying to win Bayern another treble. -- Jonathan Harding

- Dortmund 2, Bayern 0. Look for the hosts to shut down Lewandowski and, for the first time since a home win in April 2012, take all three points in a big Bundesliga match against Bayern during the second half of the season. -- Uersfeld

- Dortmund 2, Bayern 4. Dealing with this Dortmund attack means Bayern will wobble a bit more than they have in previous meetings, but they are still the best in the Bundesliga for a reason. 4-2 Bayern.-- Harding

- Dortmund 1, Bayern 2. Lewandowski has a habit of scoring in these fixtures, so expect him to grab a double as Bayern effectively wrap up the Bundesliga title. -- Hamilton

- Dortmund 2, Bayern 3-2. BVB have been one of the 5-10 best clubs in the world over the past few months, but Bayern might be the best at the moment. -- Connelly

- Dortmund 2, Bayern 1. Bayern are the better team overall, but Dortmund's intense pressing and high-speed transition attacks will make their lives difficult. (I also expect at least one Haaland goal and another awkward post-match interview from the big Norwegian.)-- Eckner