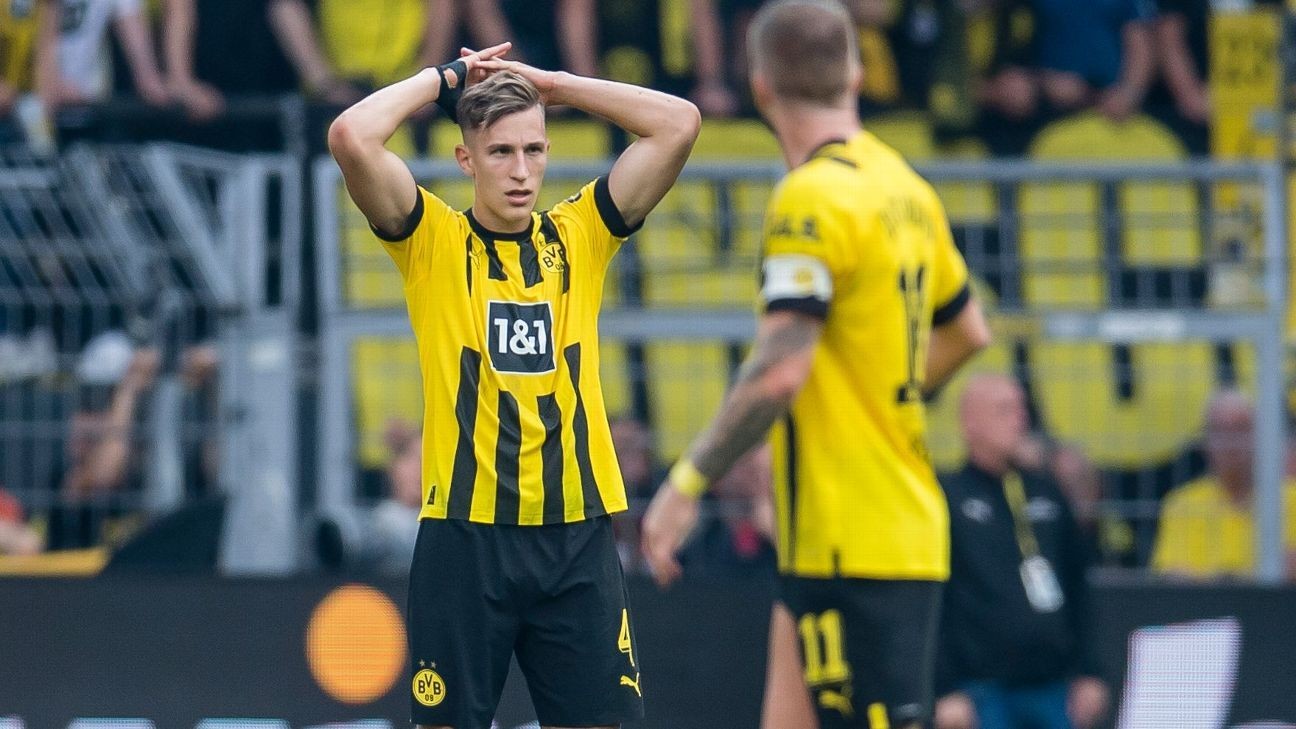 With three weeks of the campaign now complete, ESPN's lead Bundesliga commentator Derek Rae examines early-season stutters by one of Germany's biggest clubs. Borussia Dortmund are in midtable and have hardly convinced so far in 2022-23, so why aren't BVB completely wired in yet?

Normally when commentating on a live match and even when a high-profile team's performance has been downright poor, once they go two in front with 13 minutes to go, at home, you sense it's probably game over. Yet on Saturday, while commentating on Dortmund against Werder Bremen for ESPN viewers in the U.S., I had nagging doubts. Bremen, just back from a one-year hiatus in the 2. Bundesliga, had outplayed and outsmarted BVB without having the requisite punch in front of goal.

Dortmund registered only five attempts in the whole game, their lowest figure in a Bundesliga home game since data collection began in 1992. But little could I or anyone have foreseen the sheer madness that would come in the closing minutes. Literally, if you blinked, you missed the greatest late fightback in league history. Bremen's 3-2 win, with all three goals coming in the 89th minute or later, will go into the annals.

Having covered all three BVB games to start the season, I must admit to not having been especially convinced by them. In the opener against Leverkusen, they won plaudits for a fighting spirit embodied by new defensive lightning rod Nico Schlotterbeck, and for managing their way to victory while under the cosh for large swathes of a difficult second half. A more honest assessment might have been: a fortuitous win, certainly an Arbeitssieg ("laboured victory").

Then there was the 3-1 success at SC Freiburg, powered by goals from three different substitutes, which papered over more significant cracks. Jamie Bynoe-Gittens levelled the game late on, but was assisted by a spectacular spill from Freiburg keeper Mark Flekken. Dortmund added to their total in the final six minutes through Youssoufa Moukoko and Marius Wolf. With BVB, it becomes tempting to look upon spirit, mentality and endeavor as important features.

At least the Schwarzgelben were showing signs of grit, perhaps hinting that their glass-jaw tendencies had been banished to the dustbin of history by Edin Terzic, who is back at the helm after guiding the club to DFB-Pokal success in 2021 while serving in an interim capacity.

There was no steely resolve against Bremen, though: just a lot of haphazard, and not particularly eye-catching, football. Dortmund looked especially lost after midfield fulcrum Mahmoud Dahoud was forced off in the 18th minute with a shoulder injury. Jude Bellingham had perhaps his worst game in a Dortmund shirt so far and got little help from Dahoud's replacement, Emre Can, as Bremen's Leonardo Bittencourt and Jens Stage went slicing through them time and again.

We should take nothing away from Werder Bremen, who enjoyed one of their finest hours capped off by Oliver Burke's majestic 95th-minute finish, but make no mistake: this was another Dortmund collapse on the back of far too many in recent memory -- think St. Pauli in the DFB-Pokal, Rangers in the Europa League, Leverkusen and Leipzig at home in the Bundesliga. Terzic didn't attempt to coat any of his comments with sugar, instead admitting that the overall performance wasn't up to standard and that Dortmund got what they deserved. Before the season, he stressed that the opposition should never have more desire to win than BVB, but it was apparent on Saturday that Terzic's side fell short.

It wasn't just desire, either. Dortmund showed huge structural problems, with the distances between the component parts of the team all over the place, no coordinated pressing and an attack very much still under construction.

Anthony Modeste, signed recently from FC Cologne, is a seasoned Bundesliga finisher with 83 league goals to his name, and it was logical to go after a player who won't have to settle into a new league while serving as a stopgap measure until Sebastien Haller hopefully returns from treatment for a malignant testicular tumour. So far, though, Modeste looks as though he's playing for the wrong team. On Saturday, he touched the ball a mere 12 times in 82 minutes.

This is not all his fault, of course. At Cologne, manager Steffen Baumgart's setup was heavy on crosses for Modeste to get on the end of, but this isn't really a facet of Dortmund's play. Besides, who would even supply those crosses on a regular basis if BVB were to tweak their approach? In short, there will have to be some meeting in the middle of the two ideas.

Undeniably, Dortmund have been unlucky with injuries in the first few weeks of the season. First Niklas Sule had to go off at half-time in the DFB-Pokal win over 1860 Munich just as he was cementing a central defensive partnership with Schlotterbeck. Then another key summer signing, Karim Adeyemi, after having a hand in the Marco Reus goal that saw off Bayer Leverkusen, had to leave the pitch with a big toe injury and hasn't returned to action since. Donyell Malen, one of the winners of preseason and in the DFB-Pokal tie, became the latest injury victim last week.

On Saturday, Dortmund travel to the capital to meet Hertha Berlin (9:30 a.m. ET, stream live on ESPN+)in a fixture that proved hugely problematic for them last season on a day when the defensive side of Julian Brandt's game was brutally exposed.

This could be a week for the introduction of a back three incorporating Sule, Schlotterbeck and Mats Hummels. There's also a case for Salih Ozcan, who somewhat perplexingly has been solely a spectator so far in a four-man midfield. Also perhaps by moving to this different structure, captain Reus can play off two strikers, Modeste and Moukoko.

Dortmund must hope their late Bremen buffeting was a one-off.