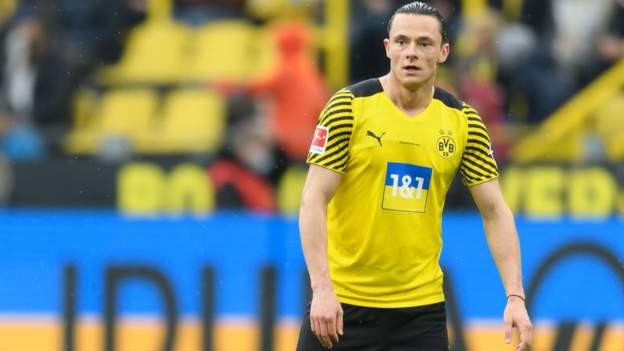 Borussia Dortmund say they have held talks with German defender Nico Schulz after allegations of domestic violence were made against the player.

It has been reported the player's ex-partner has filed a criminal complaint against him for domestic violence in 2020 and an investigation has started.

Dortmund said it was not aware of the allegations until they emerged in the German media on Saturday, but they were "extremely serious and shocking".

The Bundesliga club said at this early stage it could not take any action.

Schulz has been capped 12 times by his country, although he has not played for them since 2020.

The left-back has played 61 games for Dortmund since joining in 2019, but was not included in the squad for Saturday's 1-0 win against Bayer Leverkusen.

"Borussia Dortmund has responded to yesterday's media coverage of the criminal allegations concerning Nico Schulz's private life by immediately holding talks with the player and his advisors," the club said in a statement.external-link

"The player contests the criminal allegations that have been made against him. Nico Schulz has informed us that he will defend himself against these accusations with the help of legal counsel and, in addition, calls for the presumption of innocence to be applied.

"The allegations that have been made - of which Borussia Dortmund had no knowledge whatsoever until the media reports emerged - are extremely serious and shocking for BVB.

"Borussia Dortmund takes them very seriously and distances itself from any form of violence. However, Borussia Dortmund is not party to the proceedings and has no insight whatsoever into the investigation files or the criminal charges that are apparently pending.

"As this is a pending case in its early stages, and the factual and legal situation is extremely unclear to Borussia Dortmund as it stands today, we are not yet able to make any reliable and legally watertight decisions with regard to labour law and disciplinary measures. However, we reserve the right to do so at any time once we objectively know more."