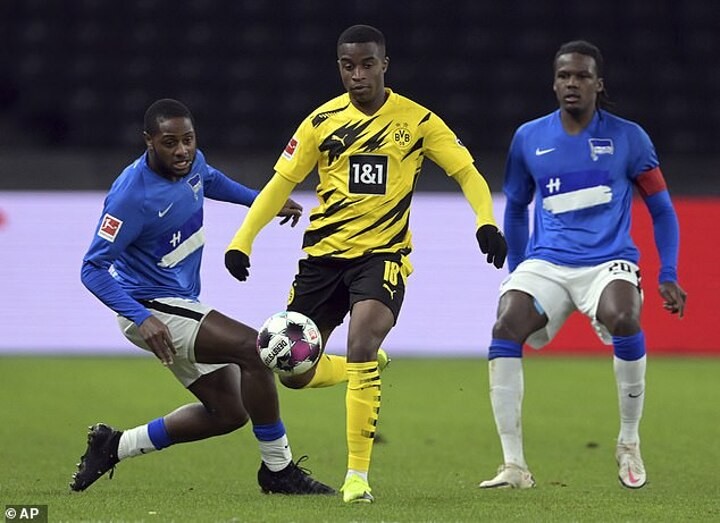 Erling Haaland knows a wonderkid when he sees one. After all, he has just won the Golden Boy award.

So when the brilliant Borussia Dortmund striker waxed lyrical about Youssoufa Moukoko, you knew it was genuine.

'Moukoko is much better than I was at his age. I think he's the biggest talent in the world right now. 16 years and one day, that is quite amazing. I'm 20 years, so I'm getting old now!'

It's never long before the next golden boy comes along in football and Moukoko, who on Saturday became the Bundesliga's youngest-ever debutant, is currently causing a tsunami of hype.

The 16-year-old striker, only old enough to play professionally in Germany as of last week, already has a £9million deal with Nike and scored an outrageous 141 goals in 88 youth team matches for Dortmund.

Now the German club have absolute confidence Moukoko is ready to take the final step into the first team. Age, it appears, is no barrier.

As Sir Matt Busby once said about his 'Babes' at Manchester United: 'If you're good enough, you're old enough.'

And, as we all know, Dortmund is probably the very best place to be a prodigiously talented young player.

When Moukoko came off the bench in their 5-2 victory over Hertha Berlin on Saturday night, to become the Bundesliga's youngest player at 16 years and one day, he replaced Haaland, 20, who had scored four times in the space of 32 minutes.

Not long before him, the 18-year-old American Giovanni Reyna had come on and before that 17-year-old Englishman Jude Bellingham.

Sat alongside him on the substitutes' bench at Berlin's Olympiastadion was Jadon Sancho, still only 20 but now into his fourth season as a Dortmund player.

Moukoko could yet eclipse all of them. He's so highly rated by Dortmund that the club lobbied the German Football League earlier this year to lower the minimum age for players in the top two divisions from 17 to 16.

That campaign bore fruit on Saturday when Moukoko surpassed Nuri Sahin (16 years, 11 months and one day, for Dortmund in 2005) as the league's youngest ever player.

Moukoko only played for five minutes but there will be many more chances. Manager Lucien Favre is certainly not afraid to throw young players into his team.

If he features against Club Brugge in the Champions League on Tuesday, he will become the competition's youngest ever player, beating the 16 years and 87 days of Celestine Babayaro, who played for Anderlecht against Steaua Bucharest in November 1994.

And it doesn't appear Moukoko - who was born in Yaounde, Cameroon and moved to live with his father in Germany aged 10 - suffers from a lack of confidence.

He was only 13 when he told reporters of his ambition 'to become a professional player in Dortmund, capture the Champions League with Borussia and win the Ballon d'Or'.

Most 13-year-olds would back themselves to achieve these things playing FIFA or Football Manager but Moukoko is already ticking off the landmarks.

Unsurprisingly, given his astonishing scoring records for Dortmund's youth sides since he joined from St Pauli in 2016, the YouTube compilations of his goals and skills abound.

We see Moukoko gliding past defenders who appear twice his size, lashing in shots from all angles and all distances.

Not only that, but on debut for the under 19s he smashed in six goals in a 9-2 demolition of Wuppertaler. For the under-17s, he got a record 50 goals in 28 games in his first season.

And prior to his elevation to Favre's first team, Moukoko had netted 13 goals in four games this season in the junior Bundesliga and the German youth cup, including four against Rot-Weiss Essen plus hat-tricks against Preussen Munster, Schalke and Wehen.

No doubt Dortmund's opponents in the Under-19 Bundesliga West Division are absolutely delighted to see the back of him.

Moukoko seems to embrace the buzz around him. His lucrative 10-year, £9m Nike deal, agreed last year, included a £1m signing-on fee and various clauses as he makes further appearances, according to Bild.

His Instagram feed features pictures of him modelling the latest Nike Mercurial boots and such is the hype that his idol Lionel Messi sent him a personalised birthday present. Who knows when that relationship might come in handy, say, for Barcelona - or even Manchester City?

But Dortmund have been clever in ensuring it doesn't all get too much for a kid not yet old enough to drive, vote or drink alcohol.

Back in 2017, Moukoko played a handful of matches for Germany Under 16s but it was then decided to leave him out the limelight for a few years. Only this year did he return to the international fold, for the Under 20s.

Perhaps it's just as well at times. Moukoko has been targeted in the past for his extraordinary talents.

When he started scoring goals for Dortmund's under-16 team as a 12-year-old, newspaper Bild questioned whether his age was accurate. His father had to present a birth certificate issued by the German consulate in Yaounde, but some remain unconvinced.

And he was singled out for horrendous abuse by a minority of spectators when he ran Dortmund's bitter rivals Schalke ragged during a youth game recently.

Video footage emerged in which spectators shouted 'lie down in your grave' and 'we'll break all your bones', leading Schalke to apologise for their behaviour.

Moukoko responded in an Instagram message: 'I will continue to do my thing. That is my passion. That is what brings me joy. [They can] hate and slander me, but you can never hold me down.'

It demonstrated a mature head on such young shoulders and if his career continues on the same trajectory, Haaland certainly won't be the last football luminary singing his praises.