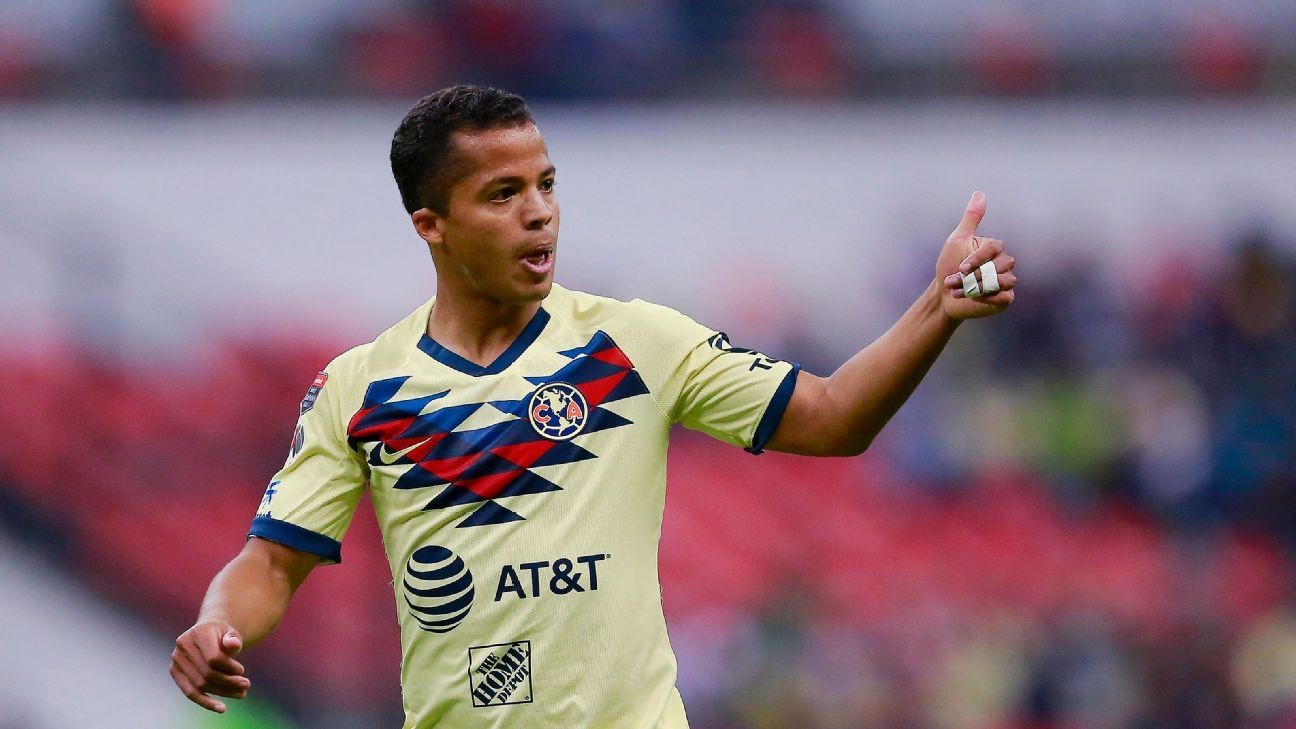 Giovani dos Santos showed he is still capable of the spectacular with a brilliant goal in the Clasico Nacional vs. Chivas. Photo Mauricio Salas/ by Jam Media/Getty Images

MEXICO CITY -- The joke among some Mexico fans is that Giovani dos Santos' club career has gone in reverse order, starting at Barcelona and ending up at Club America, with stints at Tottenham Hotspur, Ipswich Town, Galatasaray, Racing Santander, Mallorca, Villarreal and LA Galaxy in between.

"If he could pass a nightclub as well as he can pass a ball he would be alright," is a quote from former Tottenham manager Harry Redknapp that has stuck. Like it or not, Dos Santos is widely seen as an example of wasted talent.

At Club America, the club he supports and where he signed in July 2019, Dos Santos had managed only 15 starts before Saturday's Clasico Nacional against Chivas, with injuries having hampered any chance he had of getting into rhythm and finding form.

But in his first start since March 16, Dos Santos showed that innate talent is still somewhere inside and that even at 31, he can still be an impactful player in Liga MX if he can find some consistency. The forward provided the goal to hand Club America a 1-0 victory inside Estadio Azteca and extend Las Aguilas' undefeated run against their arch-rivals to six Liga MX games.

The 27th minute golazo was Gio at his best. A simple pass played into Dos Santos' feet on the edge of the area didn't immediately appear to pose a serious threat to Chivas. But the ex-Barca man, shifted the ball away from Jesus Molina with his second touch and planted it into the top corner with his third. It was quick, direct and turned out to be decisive in Liga MX's most important regular season game.

"[Dos Santos] already had a performance like that (in the game during which he picked up) his last injury and he came off after the accident," said America head coach Miguel Herrera in a video conference after the game. "Now he did it again and in 65 minutes he's given us good rhythm, he's pulled the strings and that is what I ask from Gio, I always will: he should be a difference-maker and give us that ability."

It wasn't just the goal. Dos Santos' movement, his interaction with Nicolas Benedetti and Sebastian Cordova -- in particular -- would've been reassuring for Herrera moving forward, especially since the team's style has come under some criticism.

Victor Manuel Vucetich has a big job on his hands in getting Chivas back to competing for titles in Liga MX. Photo by Refugio Ruiz/Getty Images

In general, and aside from Gio's golazo, the Clasico between Liga MX's two great rivals won't live long in the memory. There was some pushing-and-shoving at the final whistle, a couple of officiating incidents that provoked arguments on social media and a handful of chances. America stood tall and defended well late on as Chivas piled on the pressure towards the end.

But the fact that one of the main talking points after the game was a video showing Chivas and America players laughing and swapping shirts on the field after the final whistle -- something that is considered a taboo by many -- highlighted that it wasn't as incident-filled as other editions of the rivalry. In the first ever Clasico Nacional without fans, it was always going to be difficult to match the intensity that a full Estadio Azteca with a roughly split crowd produces.

This tweet is getting a strong response. Right for Chivas players to be laughing and swapping shirts after a clásico defeat? The game has certainly changed, but it's not a great look. #ligamxeng

What do people think? https://t.co/SM1z0ldafN

For Chivas, much was expected from striker Jose Juan Macias in what could've been his final Clasico against America before he jets to Europe, with Real Sociedad and Marseille reportedly interested. But this was a game to forget for Macias, who looked lost at times and spawned a good chance in the 13th minute when through on goal and bearing down on Guillermo Ochoa.

The America keeper was a contender for Man of the Match along with Sebastian Cordova and Dos Santos, but it wasn't though either goal was under siege -- Expected Goals (xG) falling only slightly in favor of Las Aguilas (1.06-0.95). "They were looking for counter-attacks and closed off spaces, which stopped us playing freely at times," stated Chivas coach Victor Manuel Vucetich. "We tried all the time, we made changes, [had] chances to score, [but] we weren't clinical."

There's no hiding that results in the Clasicos of late have replicated the form and situations of the teams, going against the notion that there isn't a favorite in these kinds of games. America has been making playoffs and challenging for titles regularly over recent years, while Chivas haven't made the Liguilla since lifting the 2017 Clausura title. Chivas have failed to get anywhere near the heights they reached under Matias Almeyda and are once again at the start of a process under Vucetich that will take time and patience to bear fruit. The all-Mexican club should make the playoffs this season -- especially with 12 of the 18 teams now making the postseason -- but there is a gap that they still need to bridge.

Over at America, the Clasico win is a boost heading into a schedule that was designed with one eye on fans being allowed back in stadia, which doesn't appear to be happening anytime soon in Mexico. Next up on Sunday is Cruz Azul in the Clasico Joven, followed by the Clasico Capitalino against Pumas UNAM.

The sad reality from the Chivas perspective is that it's the games against Cruz Azul and Pumas -- as well as Leon and Tigres in the following weeks -- that will be a better barometer for an America side that hasn't exactly been flying so far during this bizarre and unprecedented season.