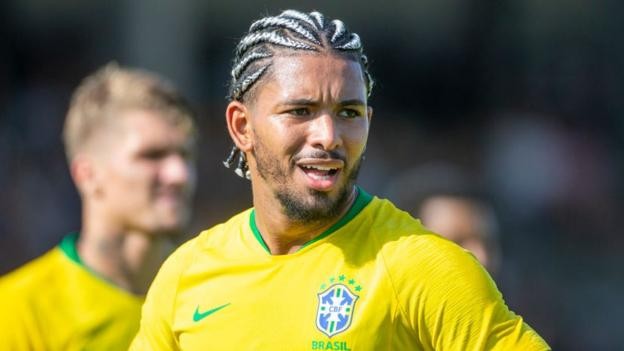 Aston Villa have agreed a £15m deal with Manchester City for Brazil Under-23 captain Douglas Luiz - and also hope to complete a £7m move for Reims central-back Bjorn Engels.

Midfielder Luiz, 21, has been on loan at Girona for the past two seasons and has never played for City.

Villa believe he will be granted a work permit despite being denied one at the start of last season.

A deal has yet to be agreed for Belgian Engels, 24, but talks are ongoing.

Luiz and Belgium Under-21 defender Engels both come on the strong recommendation of Villa sporting director Jesus Garcia Pitarch.

Engels was on loan at Reims last season from Olympiakos and only became a permanent signing for the French club at the end of the campaign.

Villa boss Dean Smith has strengthened his defence with the £20m signing of Tyrone Mings from Bournemouth and Brentford's England Under-21 centre-back Ezri Konsa.

Smith has also completed deals for Kortney Hause and Anwar El Ghazi - who were on loan at the club when they won promotion to the Premier League - along with Southampton left-back Matt Targett, striker Wesley from Club Brugge and midfielder Jota from Birmingham City.

Villa are also pursuing a £10m deal for Egypt midfielder Trezeguet, who plays for Kasimpasa in Turkey.

Smith and Pitarch were in Cairo to watch the player in Egypt's African Cup of Nations defeat to South Africa.