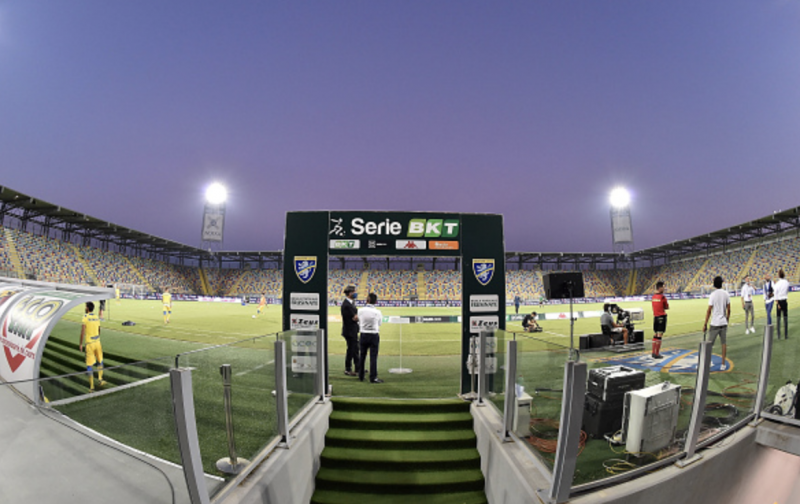 The Serie A season may be over, but there’s still plenty of joy and agony to be found in calcio over the next week or two.

As it stands, we know the identity of 19 of the clubs who will take part in the Italian top flight next season.

But a fierce battle is taking place to become the 20th and final contestant, with a mixture of familiar faces and fairytale-chasers looking to join Benevento and Crotone in gaining promotion.

On Sunday night, Forza Italian Football was at the Stadio Benito Stirpe in Frosinone to witness the efforts of Alessandro Nesta’s side in their semi-final first leg clash against surprise package Pordenone.

Amazingly, Lazio weren’t the worst-performing team of the Lazio region after the three-month mid-season break, despite their slump. Frosinone were, and by a distance.

Nesta’s side were in third place and eyeing an automatic promotion spot before football was halted, but a dreadful run of seven points from 10 games saw them spiral down the standings to eighth, only nicking into the playoffs with a late final-day draw at home to Pisa.

Frosinone’s chances of an immediate return to Serie A looked bleak as they went into their playoff quarter-final against fifth-placed Cittadella, but Camillo Ciano’s 120th-minute volley completed a comeback from 2-0 down to win 3-2 in a result that promised to kick-start their campaign at the perfect time. The Canarini have the second-highest wage budget in the division this year behind Benevento, while Cittadella have the lowest of all 20 clubs.

But playoffs are a great leveller, as Pordenone showed on Sunday. Attilio Tesser’s men recorded a 1-0 victory thanks to a thunderbolt of a strike from Luca Tremolada late on, and the Friuli side’s dream of notching back-to-back promotions is still very much alive.

The Neroverdi, from a small town of just 51,000 inhabitants in the north-eastern region, have been a revelation in their first-ever Serie B season, punching well above their weight by finishing in fourth place.

Veteran coach Tesser now has his team in a superb position to get the job done, thanks to the unusual format of the Serie B play-offs.

If a tie ends level on aggregate over two legs, the team that finished higher in the final league standings goes through to the next round.

This means that Frosinone not only need to win when they make the long trip to the Stadio Nereo Rocco in Trieste on Wednesday night, but they need to win by at least two goals.

In the one-legged quarter-finals, Empoli dropped out due to this rule. They managed a 1-1 draw with Chievo, but the Flying Donkeys progressed having finished one place above them in sixth at the end of the regular season. This also highlights just how important Ciano’s last-minute wonder-goal against Cittadella was; if the game had finished 2-2 after extra time, Frosinone would’ve been eliminated as the lower-ranked team.

Of the four sides, Chievo are in the strongest position to reach the final as it stands. On Saturday, two goals inside the opening nine minutes gave them a 2-0 win over Spezia.

The final is scheduled for Saturday 16 and Thursday 20 August, taking place over two legs, with the highest-ranked team playing at home in the return leg.

The rules remain the same for the decisive match; the higher-placed team wins promotion in the case of an aggregate draw.

One extra rule was put in place for the final, which was that extra time and penalties would be used if the two teams finished level on points in the table. But with none of the four remaining sides level on points, this won’t happen.

It’s going to be up to these sides to get the job done the old-fashioned way.

If promotion battles don’t float your boat and you prefer a bit of desperation in your football, consider tuning in for the relegation playoff between Pescara and Perugia.

The first leg takes place in Pescara on Monday night, with the return fixture on Friday in Umbria, and the same format will be used.

After finishing level on 45 points at the end of the season, one point above automatic relegation and one away from safety, these two storied clubs risk heading down to Serie C next season.

The relegation playoff only takes place if less than four points separates the 16th and 17th-placed sides, but these two couldn’t be much more closely matches; they won, drew and lost exactly the same number of games. Survival sits on a knife-edge.