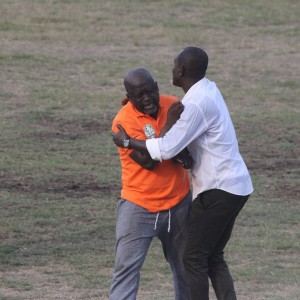 It all got emotional when the Chief Executive Officer and Director of Football at Dreams FC, Ibrahim Dossey shed tears after his side’s 1-0 win over Dwarfs at the Robert Mensah Stadium in Cape Coast last Sunday.

The visitors recorded the solitary win over the established Ebusua Dwarfs through a first half strike by sensational forward Johnson Owusu.

Though both clubs are newly promoted, Dreams FC are tasting the league for the first time and Ibrahim's emotional display explains how the Kweiman-based side will celebrate unexpected victories.

Ibrahim was sandwiched by head coach C.K. Akonnor and assistant coach Winfred Dormon who tried consoling him after the game.

Following the victory, Dreams FC became the only side over the weekend to have recorded an away victory as favourites Aduana Stars and Asante Kotoko all fell away.

Even though this is not the first time football administrators have gone emotional, the action of Ibrahim Dossey was seen by many as a description of passion and love for the game in general and Dreams FC in particular.

Dreams FC will come up against Bechem United who recorded a home win over Liberty Professionals in their opening game at the Theater of Dreams in Dawu on Sunday.