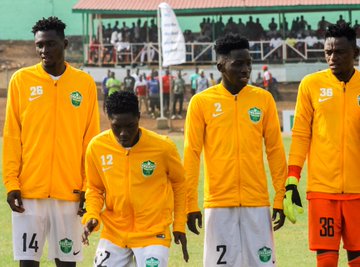 Dreams FC defender Massaudu Abdulai is not bothered by their goalless draw with Legon Cities on matchday 3 of the Ghana Premier League on Sunday.

Dreams FC dropped their first point of the ongoing campaign following a goalless draw against Legon Cities FC at the Dawu Theatre of Dreams Park.

According to stalwart defender Abdulai, though they enjoyed much of the ball possession and should have carried the day, he is not concerned about the result as it's part of the beautiful game.

The budding guardsman quickly turned his focus on their next match against Berekum Chelsea, saying that they have to make amends to return home with the maximum points.

"I'm not disappointed because football is about three things which is win, lose and draw and we managed to get a draw today so we'll keep pushing. We are going to focus on our next game an

Abdulai has been a key figure at the club since joining on a four-year deal from second-tier side Proud United in 2018.