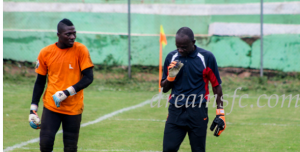 McCarthy, a former Hearts of Oak star, has become the club's number one since he joined as a free agent.

The 28-year-old has dislodged Mozart Adjetey with third-choice Ishawu Yahaya struggling to stake a claim in the team.

But newly-appointed goalkeepers' trainer Abubakari Damba has urged the two shot-stoppers to fight for a starting berth.

“I’ve worked with McCarthy both at training and outside training from our days at Hearts of Oak and even now. I know his capabilities and he looks ready than the other two,” Damba told the club's website

“They should give him a stiff challenge for the spot and they will get the chance,” he added.

McCarthy is expected to maintain his place in the team ahead of the side's trip to Medeama on Sunday.