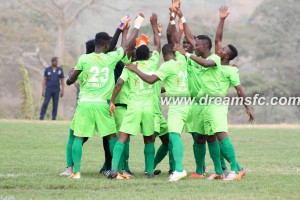 Dreams FC versatile midfielder, Godwin Horlali has warned his side against complacency after their debut win in the Ghana Premier League away at Cape Coast over Ebusua Dwarfs.

The bookmakers have touted Dreams FC as one of the clubs in the Ghana Premier League to cause an upset after their opening day exploits.

But inspirational midfielder Godwin Holarli has warned his side against complacency.

“Winning our first Premier League game means we have a good team, good technical bench and a workaholic management but we should not allow the win get into our heads. We have to guide against complacency, “ Horlali told Ghanasoccernet.com.

“We have 29 more games to play in the league and we are taking it match after match. With the kind of motivation in the team we will make our fans happy week after week,” he added.

The flamboyant Premier League debutants will come up against buoyant Bechem United on Sunday at the Theater of Dreams in Dawu.