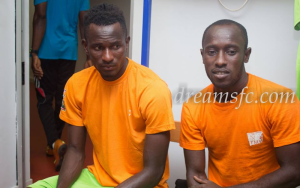 Dreams FC midfielder Emmanuel Hayford is a major doubt ahead of his side's Premier League game at Medeama on Sunday.

Hayford is nursing an injury he picked up since the start of the second half of the campaign.

The creative enforcer pulled out of the side's 1-0 defeat at Hearts and has subsequently missed the clash against New Edubiase.

“As I speak now, the other players have recovered fully and are ready for selection.” the club's Physio Commey-Bortsie told the club's website

“Hayford, until two days ago was recovering well but complained of some pains so he’s unlikely to make the trip as he needs more rest to heal fully.”