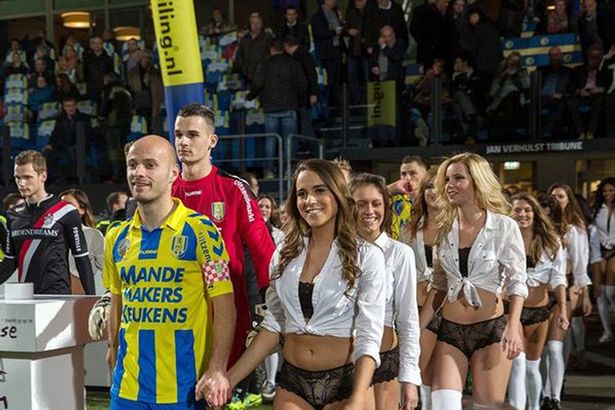 Think the skipper is happy with the decision? The smile on his face shows it all
Share

Ghana FA president Kwesi Nyantakyi's innovative plan of attracting more females to matches to boost stadium attendances among men has been effectively and comprehensively implemented by Dutch side RKC Waalwijk who replaced their child mascots with scantily clad LINGERIE MODELS!

With just one week before the start of the Ghana Premier League, Dutch side RKC Waalwijk stole the march on the Ghanaians on Sunday and unsurprisingly, this "innovation" has at least got them plenty of attention.

The display of the scantily clad females sparked a lot of excitement among the crowd ahead of the second division game against FC Emmen as the men chanted for more of such females at the struggling side's home matches.

Even though Nyantakyi proposed that more pretty females should be attracted to attend Ghana Premier League matches, RKC Waalwijk went a step further by bringing model who displayed a lot of flesh and cleavage.

The GFA boss said free entry for females in matches in the local league could attract more men to attend the games and the Dutch second tier side have proved that this could after all work with the interest generated by the presence of the model before the start of the game on Valentines Day.

RKC Waalwijk are currently rock bottom of the Dutch second division. Perhaps realising that this season can't get much worse for them, they decided to do something special for their game on 14 February, against FC Emmen.

As you can see in the clip below, they dispensed with traditional football mascots.

When you can replace them with scantily-clad lingerie models:

Do you think this idea must be implemented in the Ghana Premier League? Make your views known in the box below: