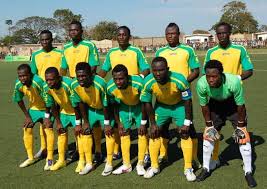 Ebusua Dwarfs will register a win over Premier League newcomers Dreams FC at the Cape Coast Stadium on Sunday according to Dwarfs midfielder Romeo Agban.

The Cape Coast-based side will welcome the Kweiman-based club in their opening fixture of the 2015/16 Ghana Premier League.

Coach JE Sarpong’s side had a fantastic pre-season campaign as their new signing Romeo Agban and Bright Lukman look the most dangerous players going into their league opener against Dreams FC.

And the former Hearts of Oak talented midfielder believes his team has a good chance of beating Dreams FC at Cape Coast.

“We have prepared well for Dreams FC and we are playing at home which I believe we will beat them,” Agban told Ghanasoccernet.com.

“We have an experienced coach who knows the ins and outs of the Ghana Premier League and we have good players in our folds as well.

So on Sunday we are calling on our supporters to fill the stadium because at the end of the game the three points will be ours,” he added.