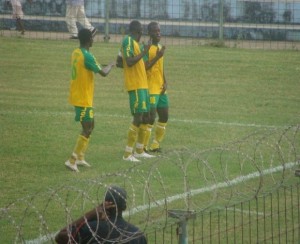 Premier League side Ebusua Dwarfs have hinted they could sanction their players for failing to report to training on Wednesday.

Players were scheduled to report to training on 27 December after a five-day rest after the league went on break.

But the entire squad failed to report to training on time which has angered their boss Professor Kwame Mintah and his backroom staff.

Board Secretary J.H Mensah has hinted punitive actions could be handed to the players for breach of trust.

"It's a shame but we expected to report to training on Wednesday but the coach went to the grounds only to meet an empty venue," Mensah told Accra-based Happy FM

"The coach is very angry at the situation and we'll consider punishing them for their behaviour.

"The league will resume very soon and we canâ€™t be complacent and think we'll get it easy.â€

Dwarfs have enjoyed one of their best starts in the league for a decade where they currently occupy the fifth spot with 19 points.