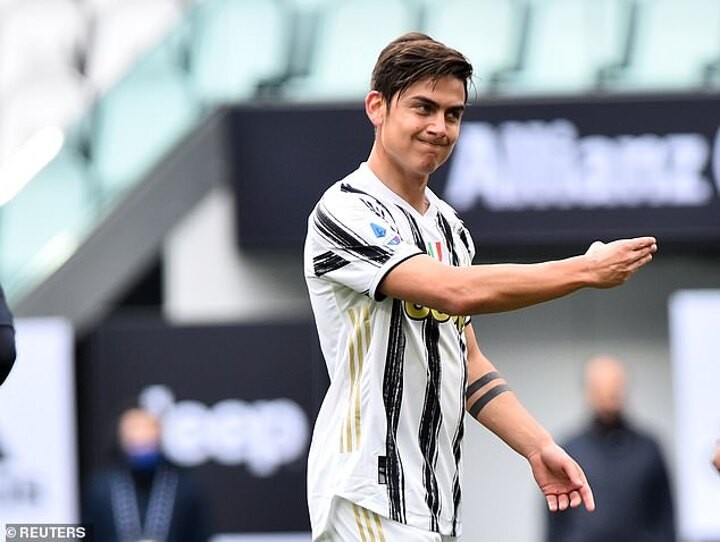 Chelsea and Manchester United will do battle over Juventus star Paulo Dybala, but they will face stiff competition from PSG, according to reports.

Dybala's future in Turin is looking doubtful, with his contract set to expire at the end of next season, and the Old Lady are said to be looking to cash in on a handful of their best-paid stars.

The 27-year-old was voted as the Serie A's MVP last season, but has not enjoyed the best of seasons this time out - scoring just three times in the league during an injury hit campaign, while also struggling with the effects of Covid.

Dybala has been a peripheral figure under boss Andrea Pirlo of late, and while the Juve coach has insisted he will be staying put, Tuttosport reports that the Blues and United are both circling for his signature.

However, Paris Saint Germain are 'in pole position' for Dybala, it adds, in a move that would see him join fellow Argentine Mauricio Pochettino, as well as superstars Kylian Mbappe and Neymar.

Juventus announced a loss of £99million for the first six months of 2020-21 and are set to sell a number of players to keep their finances afloat.

Last week Italian media claimed the club would sell at least six first team players to raise around £85m this summer, and it has also been reported that they will be forced to sell either Dybala or Ronaldo due to their huge salaries.

Considering how crucial Ronaldo has been this term - netting 32 times in 37 games - it seems like Dybala would be more expendable, and he would not be short of offers given his standing as one of Europe's top forwards.

Dybala came close to joining Man United in the summer of 2019, before the move broke down - while he also held advanced talks with Tottenham before committing his future to Juve.

Man United are in need of a new striker who can bolster Ole Gunnar Solskjaer's attack - the club signed Edinson Cavani last season but the Uruguayan has remained a back-up option for the Red Devils.

Chelsea, meanwhile, are looking for additional firepower having watched £53m striker Timo Werner struggle to adapt during his first season in England.