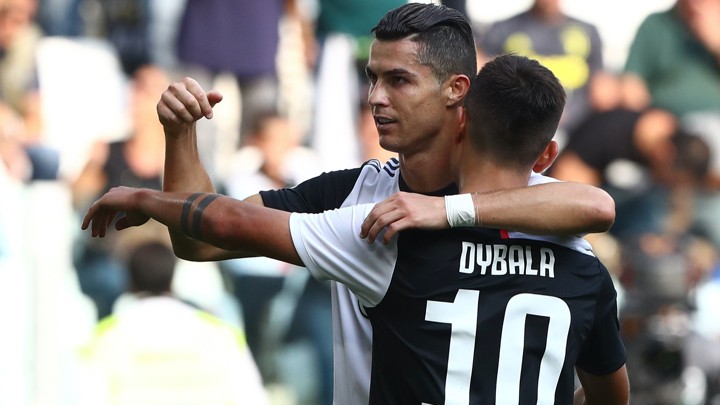 Paulo Dybala says that he told Juventus team-mate Cristiano Ronaldo he is not a very popular figure in Argentina, as Lionel Messi's homeland "hates" the Portuguese star.

The sporting rivalry between Messi and Ronaldo has seen both elevate their status as two of the greatest to ever play the game.

Clashes between Messi's Barcelona and Ronaldo's Real Madrid have been among the most anticipated and appreciated in football history, with both players seemingly raising their games in an effort to best the other.

Ronaldo moved to Juventus in 2018, ending the on-field rivalry in La Liga, but the debate still continues as to which of the two should be counted as his rival's better.

Now a team-mate of Ronaldo in Turin, Argentinian international Dybala admitted to the Portuguese star that his country has no love for him, even if he has since learned that forward is a person worthy of admiration.

"I said to him, 'Cristiano, in Argentina, we hate you a bit because of your figure, because of how you are, of how you walk'," Dybala said in an interview with the Argentinian Football Association.

"'The truth is that you've surprised me because I've found you to be different.'"

Dybala is one of the few stars to have played alongside both Ronaldo and Messi, giving the forward a unique insight into two of the greatest to ever play the game.

However, the Juventus star came under fire last year when he said that he found it difficult to play alongside Messi with Argentina.

With both Messi and Dybala playing a similar position, the Juventus star has said he has struggled to combine with the Barcelona legend.

Dybala says he has since talked tactics with Messi as the two have looked to find an understanding of how they fit together positionally.

"I've never intended to criticise a teammate, I simply wanted to improve something that was happening," Dybala said.

"I spoke about it with Leo because we're both very similar tactically.

"I didn't have many minutes at the World Cup or the Copa America but, at the same time, I always respected the decisions of the coaches because Argentina is very prestigious."

Dybala was recently diagnosed with coronavirus and, after recovering from the illness, admitted he was "scared" in the days after testing positive.