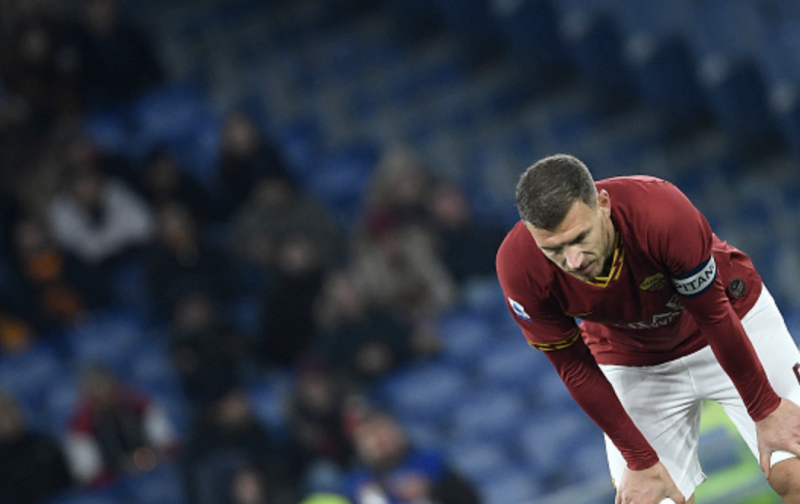 Paulo Fonseca’s decision to start Nikola Kalinic ahead of Edin Dzeko against Udinese was, at face value, understandable.

Dzeko is 34 years old and had just played two games in the space of four days, while he was a booking away from missing Sunday’s important trip to Napoli.

Rest and rotation will be crucial during the run-in, and a home clash against one of the poorest and most out-of-form teams in the division seemed as good a time as any to recharge the Bosnian’s batteries.

But the catastrophe that followed spoke volumes about the difference between Roma with Dzeko and Roma without Dzeko. Not only did the limp 2-0 defeat to the Zebrette end a six-match winning run in this fixture for the capital club, it was the first time in 13 home games against the Friuli outfit that they failed to score.

The humidity at the Stadio Olimpico was stifling on Thursday night, and the lack of fans made for a soulless experience in the vast arena.

But the conditions, and the eight changes made by Fonseca to the side that lost to AC Milan over the weekend, don’t excuse a sluggish display that once again raised questions about this team’s ability to perform without their talismanic striker.

It doesn’t help that Kalinic has failed to make an impact in the capital. The Croatian has just two goals to his name from 11 league appearances, and they both came in the same match against Cagliari. He was disappointing again on Thursday, more of a passenger than a spearhead, but the issues this team have without their No.9 go beyond the form of Kalinic.

Dzeko has played in 35 matches this season, only being rested for a couple of games in the Coppa Italia, one in Serie A, one in the Europa League, and missing out through suspension in a couple more league games.

The former Manchester City man is having a strong season, notching 16 Serie A goals, and Roma have won 11 of the games in which he has found the net.

So far this season, Roma have won 68.8 percent of the time when he’s struck, and only 27.8 percent when he hasn’t.

It appears that Fonseca needs Dzeko not just to play, but to play well for his team to get a positive result. The other attacking options aren’t stepping up, leaving the 34-year-old with a heavy burden on his shoulders. That has been particularly noticeable since the return from lockdown. Against Sampdoria, Dzeko was in top form, scoring two magnificent goals that single-handedly won the game for Fonseca’s side.

A few days later against Milan, he headed wide a glorious chance with the score still at 0-0, and failed to reproduce any of the Samp magic as his side fell to a 2-0 defeat.

Perhaps the best illustration of how Roma’s attack is built around the Bosnian is the fact that each of their last 18 home goals in Serie A have been scored inside the box (including three penalties), a sign of a team looking to feed their most dangerous weapon.

There was also a desperate lack of leadership on display on Thursday, with nobody willing to seize the game by the scruff of the neck and captain for the night Diego Perotti getting himself sent off after just half an hour for a dangerous challenge. Having a top-class striker and looking to use him effectively isn’t a strategy worthy of criticism.

But failing to have a Plan B is. And without the much-missed cut and thrust of Nicolo Zaniolo, the Giallorossi haven’t been able to rely on other attackers to step up when Dzeko is either not on the pitch, or having an off-day.

This failure has cost Roma points this season, and ultimately a Champions League place.

Atalanta’s win over Napoli, combined with the Lupi’s defeat to Udinese, means they are 12 points outside of the top four now, an insurmountable gap given the differing form of the two sides.

After the game, Fonseca himself described catching La Dea as “practically impossible”. All of a sudden, the narrative isn’t about catching Atalanta but clinging on to fifth place. They will be casting worried looks over their shoulders at Trigoria following recent events.

Defeat in Naples on Sunday would see the Coppa Italia winners join Roma on 48 points and, if their margin of victory is greater than the Lupi’s 2-1 win in their first meeting of the season, Gennaro Gattuso’s side will bump the capital club out of the top five.

Milan and Verona are just five and six points back respectively, meaning Roma’s end to the season could quickly descend into a dogfight for Europa League qualification.